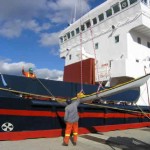 Our wedded bliss began immediately following our wedding in September ’69 when Cheryl and I moved to Goose Bay in the territory of Labrador in the province of Newfoundland. With that much description, you’d think it was a very big place -you’d have to think again. Think of a small town you’ve been to – and cut it in half. That’s Goose Bay. We did many things for the ﬁrst time while there. Life was not too complicated as we had two airbases available to us, the British RAF (Royal Air Force) base and the US Air-force Base. Liquor was cheap as were movies. Cheryl and I in our early twenties had a lifetime in front of us and very few cares in the world. We had friends and neighbors everywhere and it always seemed that half of the RAF was at our small home eating and drinking to the wee small hours of the morning. Remind me to tell the story of one Scotsman named Dinger Bell (yes, that was his name) playing his bagpipes in our small home one summer’s morning at 2:00 AM with the windows open.

Since childhood, I’d always had a dog and/or a cat of some kind wandering around my home. Upon arrival at Goose Bay Cheryl and I adopted a dog and a cat which we promptly named Newf and Screech. Those of you not familiar with Newfoundland Screech, a rum based liquor from the bottom of the barrel, may not immediately see the cleverness in the names of our ﬁrst two pets.

A short while later we also adopted a little bag of fur which we named Taff of Labrador. Taff was a small ﬁve pound bundle of very young St. Bernard. We had no idea that Taff was to grow to be 29” at the shoulder and weigh 215 lbs. He was one giant four legged tongue who was as nimble as any Chihuahua (or at least he thought he was.) The tongue would easily reach the middle of any dining room table.

Taffy (as he became affectionately called) was no ordinary dog, he seemed to be able to make friends wherever he went and everyone with few exceptions loved Taffy.

The real stories about Taffy began when Cheryl and I took a three-week vacation with our dogs, Newf and Taffy.

Let me explain that in 1971 Goose Bay where we were living was only accessible by boat and plane. There were no roads to the outside world. We owned a Volkswagen Camper and needed to have it with us for the vacation to the Island of Newfoundland and Canada’s mainland. The way one did this was to book passage on a coastal boat. Coastal boats plied the coast of Labrador stopping at all the outport villages, most of which were more desolate than Goose Bay. The boats deliver supplies such as food and building materials and sometimes large mail items to the residents of these coastal outport villages. They would normally leave the port of St. John’s or Twillingate, the iceberg capital of the world they claim, on the island of Newfoundland every week during the warmer months of the year. Some would turn inland into Lake Melville and stop at Goose Bay to deliver goods and pick up freight and passengers. 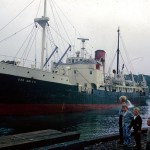 The story begins with the loading of our VW Camper on to the coastal boat. Newf, our small mongrel weighed in at about 40 pounds, and we knew she’d be no challenge to carry up the narrow gangplank onto the boat. Taffy, on the other hand, was seen as more of a problem. Cheryl and I had been down to the docks a couple of times before our planned departure studying the lay of the land so to speak. The gangplanks were perhaps 50 to 70 feet long, their steps were perhaps 24 inches across. The railing which one would grasp as he climbed the gang plank was little more than a rope or wire cable with the occasional vertical line attaching the railing to the “plank”. The plank was really a series of steps or slats which adjusted themselves to horizontal when the angle of the gangplank was not ﬂat. Basically it was rope bridge between the shore and the boat and was not for the faint hearted. We could not see ourselves carrying Taffy the 215 pound Saint Bernard, up the gangplank.

So, in our brilliance, we hatched a plan. Our vet provided us with some tranquilizers for the Saint Bernard, and as instructed, put them in his mouth an hour or so before departure. We left the dog in our Volkswagen Camper which was about to be hoisted onto the boat. The dog slept peacefully on the ﬂoor of the camper. All was going very well. We were to carry some small hand luggage on to the boat along with Newf, our forty pound mongrel.

As the longshoremen were placing straps around our camper to allow it to be hoisted on to the deck, one of them happened to look inside and saw the sleeping dog. All work stopped while they hunted me down and explained that they could not load the camper with the dog inside. They just would not let a sleeping dog lay. Their concern was that if the dog were to wake up and move quickly inside the vehicle then it might fall. We extricated the dog from the camper with great difﬁculty. The sleeping pills had made the dog very drowsy, and he could barely walk more than a foot or two without lying down and drifting off to sleep.

You know what happened next, right? You can see it. With a lot of coaxing from Cheryl and me, we got Taffy to the foot of the dreaded gangplank. The plank which was about two feet wide, set at an upward angle of about twenty degrees from horizontal with open sides and open spaces between the steps. Below the gangplank was concrete and open water, the dark nearly black oily water perhaps ﬁfty feet down.

Should I try to lead the dog or push him? It was decided that Cheryl would lead up the gangplank holding Taffy’s lead and I would push and carry the rear end. With a drink of water for Taffy just before our ascent to freshen him up, we began. We had about seventy feet in front of us. As we began, all went well, Taffy simply started to climb the stairs, much to our relief as we thought this was to be a total disaster. As we approached the half way mark with about thirty feet to go Taffy looked down, became scared and simply laid down with his feet then extending through the gaps between the steps and his belly on the steps.

I could lift the back end but Cheryl, who even if soaking wet carrying a load of encyclopedias weighed in at about 50% of the dog, had no way of lifting the front end. We were in the midst of a crisis and no apparent way out. To the rescue came the boat’s First Mate. He yelled down to Cheryl to have her come up to the boat and then he came down and picked up Taffy’s front end. I picked up his rear and with some difﬁculty we managed to carry the dog onto the boat.

At the moment we got Taffy on deck, this huge cheer erupted from the railing of the ship and from the people on shore. I would guess that a hundred or more people had been watching us load the dog onto the ship, and they were as relieved as we were that Taffy had made a safe trip to the deck. Their cheers were as you might expect– both embarrassing and warming. The events that follow this will be told in another chapter. Read on to learn about life on the boat, the momentary loss of Newf and let’s not forget Wells, Wells, John Wells, Wells was his name and selling his game.

Tweet
« The Wildest Christmas Dinner
Southbound on The Coastal Boat 1971 »