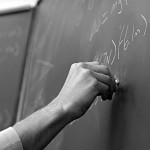 I was a prankster as a kid and to some extent I am now, but somehow maturity and fear cause me to think twice too often now. By the time I had reached the ninth or tenth grade I had learned that secrets shared by more than one person were not really secrets. The prank I describe below was done by me in complete confidence as I did not tell a soul about it until a year or so ago. This is a secret I’ve held for many years.

I once watched a teacher after school or perhaps at lunch strike a match on the blackboard to light his cigarette. That was in the years when smoking was something virtually everyone did. The image of the teacher striking the match kindled an idea.

I was in 9th grade and it was late March in 1960 and April Fool’s Day was fast approaching. Back in the sixties, April Fool’s Day was not to be taken lightly, virtually everyone participated. I had a burning need to do something memorable. Finally I figured it out. I took a new box of chalk from the supply cupboard at the back of the classroom and somehow got it out of the school unnoticed. I brought it into the house and down to my Dad’s workshop I ensured that Mum and Dad did not see me.

I set up Dad’s drill press and proceeded to drill a small hole in the end of each new piece of chalk. The diameter of each hole was coincidentally the same diameter as a wooden match. I carefully cut each match to about one half inch long and pressed them into the hole in each piece of chalk. The matches were set down in the holes at varying depths with their heads up. I then filled each hole with the chalk dust that the drilling had created. The product was ready.

April Fool’s Day I arrived at school a little early and casually moved from classroom to classroom secretly placing pieces of chalk at each blackboard. I probably distributed at least 100 pieces of chalk before the bell.

By recess, the school was abuzz; in virtually every classroom a teacher had grabbed one of my special pieces of chalk and proceeded to write on the board. The chalk wore down millimeter by millimeter. The match’s head edged ever closer to the board as the chalk above it wore away. When the match’s head finally reached its target there was a flash and burn.

No one knew who had done this and kids were telling kids about it and I jumped into the fray along with the others trying to guess who had done such a thing.

That was an April Fool’s Day that I’ll never forget and for once I was not caught. I was accused and I was questioned, fortunately not tortured. Now you know one of my secrets.

I do remember when I graduated from the school. I looked at one of the blackboards and there it was 3-4 years later and one could still faintly see the burn mark on the blackboard. I guess one could say I left my mark on that school.

Tweet
« A Sharp Mind is Very Important as We Age.
An older couple falls in love. Sex is in the air! »