Home » My Life » Do squirrels always remember where their nuts are?

Yesterday, while watching TV and scanning my favorite source of news, that being BuzzFeed, I stumbled on an article entitled “64 Mind-Blowing Facts That Will Make You Feel Incredibly Happy“. I was feeling a little blue.

The first of the 64 facts was “Every year, hundreds of new trees grow because of squirrels forgetting where they buried their nuts.” 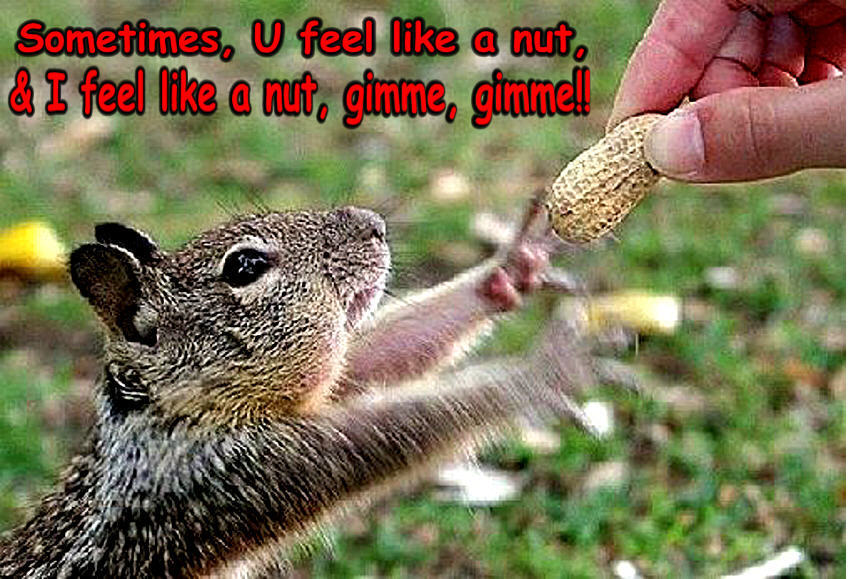 Those folks that have the advantage of knowing me, have learned that I could never resist the clicking of a link just about anywhere. The one I found at BuzzFeed link took me to a NY Times Archive from 1994, yes 1994 written by Anne Raver while she worked at the NY Times twixt 1991 and 2006. I learned this on her FaceBook Page.

You can read her article below. She is clearly a gifted writer.

Now It Can Be Told: All About Squirrels and Nuts
By Anne Raver
Published: December 11, 1994

I WATCHED a squirrel bury a chestnut the other day in a little park near my home in Brooklyn. He was holding the big nut in his long-fingered hands when he saw me out of the corner of his eye. He froze, as if considering whether or not to abandon his plan — to bury the nut, I suppose — or to ignore me and continue.

It was almost insulting how this city squirrel, far tamer than the ones I’d grown up with, apparently decided I was of no consequence and got on with the job (which was nice for me because I’d never seen such a thing before in my life).

The squirrel set his nut aside and began to dig — not more than five feet from my shoes. He dug a hole so deep his little arms soon disappeared, and then his head (it was a large nut, after all, that he was about to bury). Then he quickly straightened up, grabbed the nut, put it in the hole and began scooping the soft soil back into the hole with the care of a master gardener. When the hole was filled, he patted down the soil, then proceeded to pound it with his arms like a miniature jackhammer. (He must have been trained in the old rose-planting method, in which you really stomp on the soil.) Then he scooped some leaves over the spot and was off. 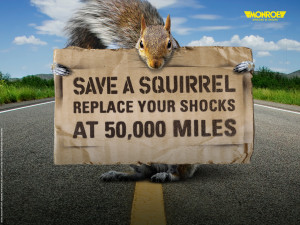 I was suddenly full of questions: Would he remember where the nut was? Or would he just get lucky and find it? Or would some other squirrel find this nut and this squirrel would find that squirrel’s nut and so on. Or would most of the squirrels forget most of their nuts and thus, as all those acorns sprouted into tiny oaks, contribute to the reforestation of Brooklyn?

And what if we get another 53 inches of snow this winter? And a hard crust of ice to boot? What will the squirrels do then? And are the old-timers right — does a bumper crop of acorns and a lot of squirrels scurrying about to bury them mean that a hard winter is on its way?

I scurried back to the office and started calling around for a squirrel expert. I struck gold at the biology department at Bryn Mawr College in Pennsylvania.

Peter Smallwood, who started studying squirrels about 10 years ago as an undergraduate at Ohio State University (he wanted to study whales but there weren’t very many in Columbus), said there was no correlation between bumper crops of nuts and hard winters. Trees and shrubs produce nuts and berries on a cyclical basis. Period. And squirrels are busy when there are a lot of nuts around. It’s like those people who can’t sit still if there are peaches to be canned; it’s in their genes.

Dr. Smallwood proceeded to highlight some of the experiments that he and Michael Steele, a biologist at Wilkes College in Wilkes-Barre, Pa., wrote about in an article called “What Are Squirrels Hiding?” in the December issue of Natural History magazine.

Scientists have long thought that gray squirrels, which are far more common to the Eastern Seaboard than their red cousins, can not only remember where they dug their holes, but also smell the nuts they have buried. (But they must not be too good at either skill, since studies show they fail to recover about 74 percent of the nuts they bury.) Their failure is actually a gain for trees: squirrels are the inadvertent heros in forest restoration. 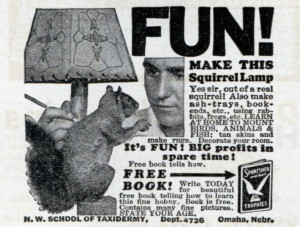 How To Make a Squirrel Lamp

They are also highly discriminating when it comes to deciding which nuts to eat immediately and which to store.
A gray squirrel is far more likely to bury a red-oak acorn, which is rich in fat and sprouts in the spring, than a white-oak acorn, which has less fat and tends to germinate soon after it hits the ground in the fall. In more than 1,200 feeding trials set up by Dr. Smallwood and his colleagues, gray squirrels buried more than 60 percent of the red-oak acorns they came upon, while they ate 85 percent of the white-oak acorns they found.

“If a squirrel finds a white-oak acorn that’s sprouted, it will bite off the unpalatable taproot, spit that out and eat what is left,” Dr. Smallwood said. “But a lot of what is useful has disappeared. So gray squirrels tend to eat the white-oak acorns immediately, before they germinate.”

It’s simply evolution in action. “I’m not implying that squirrels are consciously thinking,” he said. “But the ones that got into that habit had a lot more to eat, so they survived.”

The red-oak acorn, which is high in tannin, isn’t as tasty as the white-oak acorn. Scientists think that tannin, a bitter-tasting chemical, protects the seed inside the acorn by discouraging grazing and by repelling insects — another reason why the red-oak acorn is a better candidate for underground storage.

Dr. Smallwood has seen squirrels carry a few acorns to their nests of leaves built high in the trees — or into cavities in tree trunks — but they don’t seem to put in a large supply.

“If we get a cold day, they stay in their nests,” he said. “If we get two bad days in a row, they might stay in both days. But by the third day, even if the weather’s worse, they’re back out. They’re clearly hungry, so whatever food is up there, it’s not a lot.”

Last year, the ground at Bryn Mawr was covered with ice from January to February.

“Squirrels can dig through snow, but not ice,” Dr. Smallwood said. So the squirrels on the college campus learned to “Dumpster dive” he said, feasting on pizza crusts and chicken bones.

He also said that he had seen squirrels eat birds’ eggs, road kill and even young nestlings in the spring.
“Spring is a hard time for them,” he said. “Their acorn stores are starting to run dry, and even if the leaves have budded out, a baby bird is a great package of protein.”

Naturalists have also noticed that squirrels don’t bury acorns infected with larvae, but eat these high-protein treats immediately. In fact, squirrels will often eat the tops of red-oak acorns — if infested with larvae — and then bury the bottom halves. It’s the bottom half that contains the tannin-laced embryo of the oak seed, so these conservationists, which scamper a lot farther from a tree than an acorn can fall, have been spreading oak trees for thousands of years.

“Sorry,” he said. “My boa constrictor has learned how to climb down from his perch, and he’d gotten down by the heater and I was afraid he’d burn himself.” (Dr. Smallwood has also performed mouth-to-mouth resuscitation on squirrels who went into shock, but that’s another story.)

Other writings of Anne Raver at Amazon ( Click Here )

Other writings at the New York Times (Click Here)

The Full BuzzFeed article I found can be seen by clicking here. 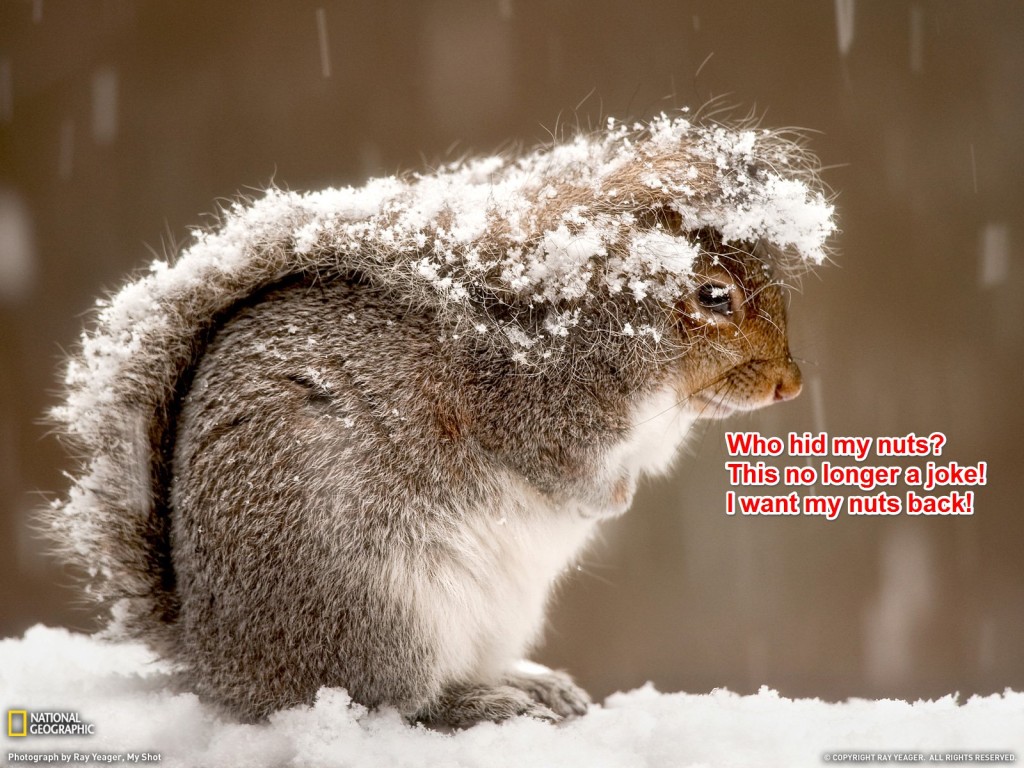 Tweet
« How I was LED to save Money
Cyanara Baby aka Hasta La Vista, Baby »