Home » My Life » Do you know where Bockwurst comes from? 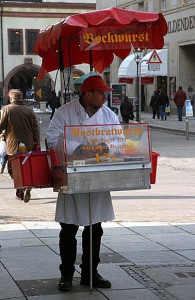 Not that many years ago. Well it was before the advent of the internet being available on a cell phone or perhaps the internet was not available at all. My guess is that this memory is from the mid 1990’s.

I was being driven across the German countryside by a good friend named Klaus Wenske. Klaus knows that I like German sausage, and many times he would introduce me to a new wurst. Germany has the best wurst. That day it was Bockwurst. We stopped for lunch at a roadside diner and enjoyed some Bockwurst on a bun with mustard. It was great lunch which included a Bock Beer. I asked Klaus if Bock Beer and Bockwurst had the same origins. He was not sure. He explained that the Bock Beer got its name from the male deer with antlers on the bottle (we say Buck and they say Bock).

He tried several times to come up with plausible explanations for Bockwurst but none was completely believable as he told them without conviction. I guess I chided him a little too much because in a fit of frustration he looked at me and said “I don’t know where the name Bockwurst comes from. Where does the word ‘marshmallow’ come from?” This was a great question as I had no idea. Not to be outdone I grabbed his cell phone and called Peter Reinhard a friend of mine in the USA who knows everything. I was surprised when the question of the origin of the word marshmallow stumped Peter. At home Peter has a great collection of dictionaries and he phoned Margrit, his wife, who looked it up. Now I was prepared! I learned that it is “a confection of sweetened paste, formerly made from the root of the marshmallow plant.” and also learned that it is “a perennial plant (Althaea officinalis) native to Europe and naturalized in marshes of eastern North America, having showy pink flowers and a mucilaginous root occasionally used in confectionery”.

I shared this deep knowledge of the “root” of the word marshmallow with Klaus and asked the question again, “Where does the name Bockwurst come from?”

Klaus still has not told me!

5 thoughts on “Do you know where Bockwurst comes from?”