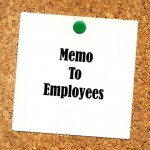 It has been brought to management’s attention that some individuals throughout the company have been using foul language during the course of normal conversation with their co-workers.

Because of complaints received from some employees who may be easily offended, this type of language will no longer be tolerated.

We do, however, realize the critical importance of being able to accurately express your feelings when communicating with co-workers.

Therefore, a list of 18 New and Innovative ‘TRY SAYING’ phrases have been provided so that proper exchange of ideas and information can continue in an effective manner.

Number 1
TRY SAYING: I think you could use more training.
INSTEAD OF: You don’t know what the f___ you’re doing.

Number 3
TRY SAYING: Perhaps I can work late.
INSTEAD OF: And when the f___ do you expect me to do this?

Number 4
TRY SAYING: I’m certain that isn’t feasible.
INSTEAD OF: No f___ing way.

Number 5
TRY SAYING: Really?
INSTEAD OF: You’ve got to be sh___ing me!

Number 6
TRY SAYING: Perhaps you should check with…
INSTEAD OF: Tell someone who gives a sh__.

Number 7
TRY SAYING: I wasn’t involved in the project.
INSTEAD OF: It’s not my f___ing problem.

Number 8
TRY SAYING: That’s interesting.
INSTEAD OF: What the f___?

Number 9
TRY SAYING: I’m not sure this can be implemented.
INSTEAD OF: This sh__ won’t work.

Number 10
TRY SAYING: I’ll try to schedule that.
INSTEAD OF: Why the f___ didn’t you tell me sooner?

Number 11
TRY SAYING: He’s not familiar with the issues.
INSTEAD OF: He’s got his head up his a__.

Number 15
TRY SAYING: I don’t think you understand.
INSTEAD OF: Shove it up your a__.

Number 16
TRY SAYING: I love a challenge.
INSTEAD OF: This f___ing job sucks.

Number 17
TRY SAYING: You would like me to take care of that?
INSTEAD OF: Who the f___ died and made you boss?