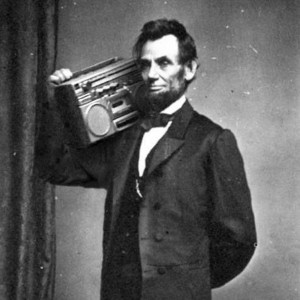 Abe Lincoln with an early Ghetto Blaster or Boom Box.

I stole this from the Urban Dictionary.

Ghettoblaster is a term that can be considered insulting or complimentary depending on the context. The word originated in the US, apparently reflecting the belief that they are popular in poor inner-city neighborhoods (ghettos), especially those populated by black Americans. Ghettoblaster rather than boom box became the common term in the UK and Australia for large portable stereos, perhaps because it carried less meaning.The term carries a connotation of power and disregard of social rules.

The word is racially inflammatory in some circumstances but has also been embraced as a term of black, urban pride — and, like many such terms, has been adopted by parts of the non-black American community. It is used as the name of at least one magazine and one recording company, and is also a popular stereotype element typically associated with funk, hip-hopand rap, African-American culture, ’70s and ’80s culture, breakdancing, and even racist jokes.

In the film Do The Right Thing by Spike Lee, a dispute over a ghettoblaster is a central role in the culminating riot.

This site uses Akismet to reduce spam. Learn how your comment data is processed.