Good fences make good neighbors, or so they say. We moved into a brand new subdivision in 1974, and that summer I organized a “fencing party” on our side of the street. We had the owners of about 10 homes over at our house one Saturday afternoon in the spring. The homes were all in one row on one side of the street. They backed onto a well-established subdivision that had been built thirty or so years earlier. We discussed the need for fencing between our homes as some of us had dogs, some had children, etc. We discussed the advantages of wood vs. chain link, and we broke into committees with a plan to get back together the next week after researching costs and material choices, etc.

The decision was made that we would build a cedar fence with horizontal planks alternating from post to post. There were one or two abstainers who got fences anyway as we were to build ours around them. Materials were purchased by the group and work began.

The toughest weekend was the first where we mixed cement, cut posts, rented a motorized post hole auger, and about six or seven of us installed 160 four by four cedar fence posts. What an exhausting job that was! 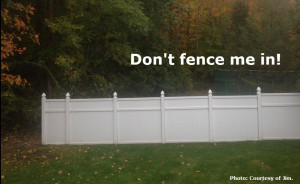 Don’t Fence Me In Photo courtesy of Jim

A block or two away a similar group was building fences also, and they, like us, had formed committees, bought as a group and shared the work of installing their fences. They had chosen vertical cedar and they completed their efforts, like us, by early summer. The Good Neighbor story is really about one of the families in that group.

One of the abstainers in their group ended up being fenced in on three sides for free by his neighbors. There was a lot of grumbling and mumbling but his fence was free. He did build two small lengths of fencing with gates from the sides of his home out to his free fence.

Things started to heat up when the freeloading neighbor put a pool in his yard. Bylaws in our town required that pools must be fenced. He bought and installed his pool inside his free fence. Imagine the grumbling and the mumbling now as each day went by and one could see and hear them enjoying their pool inside their free fence. The pool guy might have at least tried to invite neighbors into his pool. I suspect that none would have taken him up on an invitation, but an effort like that might have spared him a lot of work.

The neighborhood had a party one Saturday night. The pool guy was not invited. The party was at one of the homes adjoining Mr. PoolGuy’s home. Alcohol was being consumed and the grumbling and the mumbling turned into louder mumbling and grumbling until one of them said, “I think we should take our fences down!” and they did, at one or two in the morning. Out came the hammers and nail pullers and about an hour later, there was a pool in Mr. PoolGuy’s yard with no fence.

Mr. PoolGuy had to take the next few days off work building a fence around his pool while the neighbors watched. With his job finally complete, he listed his house and moved out by the fall.

The new neighbors with the pool had everyone over for pool parties the next year. I guess good fences make good neighbors, eventually.