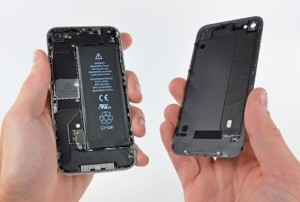 A friend of mine named Ken sent me an email with the story relating his experience saving $63.01.

Readers should know that I have been an iPhone user for short periods of time.

I keep coming back to Androids. My first iPhone three or four years ago was a disaster, my experience with it caused me to coin the phrase that “an iPhone was a digital representation of a dumb blond” , but I digress …

Ken said to me. Please feel free to pass along this information to any that might need it. I have a little story to tell below on replacing a battery in an iPhone for all that might have one.

Recently my iPhone battery was dying. It no longer could hold a charge and died out after about 4 hours. To have Apple replace a battery is a charge in the US of $79.00 plus $6.95 for shipping and handling. Plus you give the phone to them until they can return it. Being the cheap guy I am I chose to look elsewhere. Plus I did not want to be without the phone. I mean, how hard can it be to change a battery?

I found a website, iTool Battery, that had all Apple products batteries for sale. I will give you the link at the end. I bought the iPhone 4 battery that I needed from them. In total with shipping this cost me $22.94. That was a savings of $63.01.

I received the new battery in a few days. In the kit you get a special tool to use, the battery, and a link to video instructions and written instructions. First I wanted to read the written instructions. I went to the site and tried to download them and the links failed. I tried everything and could not get them. I next proceeded to look at the video. It worked and made the installation look simple. Hmmm, too simple! So I went ahead to take apart the iPhone as per the video. There are two screws on the bottom. I used the tool provided and it did not work. My rotten luck!

Next I tried to call the company and I got no answer. Then I tried to send a help request via the website and it failed. Uh oh! I felt I had been taken!

Two days later I decided to give it another try. After 4 attempts I reached a live body on their phone number for support. The woman I spoke with had very poor English speaking skills. Heavy oriental accent! I described my problem and she promptly said she would immediately send the correct tool. She had my order info and said that was all she needed. I received a tracking number immediately and all looked good.

In a few days I received a package from them at no charge. I could not believe what was inside. I received eight different tools. I now have a set of tools to open any Apple product – iPhone, iPad, ianything! So, I was now ready to proceed.

I removed the two bottom screws as the video showed. Piece of cake but they are teeny and you have to use care in handling and removing. Not too bad.

Next I slipped off the cover as the video showed and it was perfect. Now we come to the battery inside. (By the way, for you engineering types, Apple did an excellent job in layout and design. Amazing product inside.)

There is a screw you have to remove first that holds down the battery connector. No problem! I had to use another tool to get this out. Again no issue now that I have a set of tools.

What they did not tell me is that you have to be extremely careful or a small bracket will pop loose that holds down the antenna as well as part of the connector. It popped loose. Oh well, I will figure that out later.

In the video the next step says pull the tab and the battery lifts out. I pulled and no movement. I really pulled and no movement. I pulled so hard I was afraid I might ruin the battery or the phone in some manner. Nothing gave. So next I went to my special tools and noticed a few have these flanges and arms on them and even suction cups. I used one tool to go around the battery edges to see if I could loosen it. Nothing moved but I did get a clear edge around the battery. Next I used another tool to stick under the top edge of the battery near the side of the phone with two buttons and I got some movement up. I then used a suction cup and starting lifting. I pulled it up as much as possible and noticed Apple had an adhesive on one side holding it in. This was not in the instructions.

So I next used another tool to carefully pry away the gooey adhesive and low and behold I got the battery out. I replaced it with my new battery. All I had to do was reverse the process and all would be complete. First I had to insert the connector in place. But I had this part that fell off to replace in order to do that. It was a pain aligning it after figuring how it was installed but I got it in position to screw down the connector. I had to use another tool to hold the alignment while I used another screwdriver to tighten in the screw. Thankfully the tool was magnetic and held the teeny screw in place.

So now that I had that installed I replaced the cover and then re-installed the two bottom screws and then next turned it on. It worked!

So once again I am back in business. I have a new battery installed. I saved the company money. (I did add a few more gray hairs – there are a few hairs left on my head!) And I am now a happy guy.

So if you want to change a battery it is your decision as to you doing it or letting Apple do it. It is not as easy as they say and not for the squeamish to do but if you have an iPhone it is a good alternative to save you money. Just be prepared to get involved with a small mess and some difficulty. Or you can send your phone to me and I will change it for you. I am cheap and I now have all the tools (technically I guess they are all the company’s tools since they are going to pay for this battery. (No, I had to go through the grief. I will keep them. Ha!).

Here is a link if you want or need a battery in the future: https://www.itoolbatterykit.com/index.asp