STORY WITH A MORAL

Once upon a time there lived a beautiful Queen with queenly large breasts.

Nick the Dragon Slayer was obsessed over the Queen for this reason.

He knew that the penalty for his desire would be death should he try to touch them, but he had to try.

One day Nick revealed his secret desire to his colleague, Horatio the Physician, the King’s chief doctor.

Horatio thought about this and said that he could arrange for Nick to more than satisfy his desire, but it would cost him 1000 gold coins to arrange it. Without pause, Nick readily agreed to the scheme. 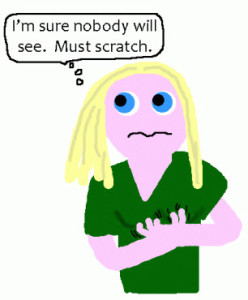 The next day, Horatio made a batch of itching powder and poured a little bit into the Queen’s bra while she bathed. Soon after she dressed, the itching
commenced and grew intense. Upon being summoned to the Royal Chambers to address this incident, Horatio informed the King and Queen that only a special saliva, if applied for four hours, would cure this type of itch, and that tests had shown that, among all of the citizens of the kingdom, only the saliva of Nick would work as the antidote to cure the itch.

The King, eager to help his Queen, quickly summoned Nick to their chambers. Horatio then slipped Nick the antidote for the itching powder, which he put into his mouth, and for the next four hours, Nick worked passionately on the Queen’s large and magnificent breasts.

The Queen’s itching was eventually relieved, and Nick left satisfied and was hailed by both the King and Queen as a hero.

Upon returning to his chamber, Nick found Horatio demanding his payment of 1000 gold coins. With his obsession now satisfied, Nick couldn’t have cared less knowing that Horatio could never report this matter to the King and with a laugh told him to get lost.

The next day, Horatio slipped a massive dose of the same itching powder into the King’s underwear.

The moral of this story is; Pay your bills!