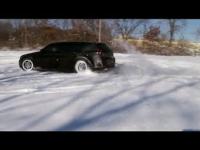 He and a friend go duck hunting in upper Wisconsin. It’s mid-winter………….and of course all of the lakes are frozen.

These two guys go out on the ice with their GUNS, a DOG, and of course the new NAVIGATOR. They decide they want to make a natural looking open water area for the ducks to focus on, something for the decoys to float on.

Now, making a hole in the ice large enough to invite a passing duck, is going to take a little more power than the average drill auger can produce. So out of the back of the new Navigator comes a stick of dynamite with a short 40 second-fuse.

Our two Rocket Scientists, afraid they might slip on the ice while trying to run away after lighting the fuse (and becoming toast, along with the Navigator), decide on the following course of action:

– they light the 40 second fuse; then, with a mighty thrust,
– they throw the stick of dynamite as far away as possible.

Remember a couple of paragraphs back when I mentioned the NAVIGATOR, the GUNS, and the DOG…?

Let’s talk about the dog:

A highly trained Black Lab used for RETRIEVING; especially things thrown by the owner. You guessed it………………….The dog takes off across the ice at a high rate of speed and grabs the stick of dynamite, with the burning 40-second fuse……….. just as it hits the ice.

The two men swallow, blink, start waving their arms and, with veins in their necks swelling to resemble stalks of rhubarb, scream and holler at the dog to stop.

The dog, now apparently cheered on by his master, keeps coming. One hunter panics, grabs the shotgun and shoots the dog. The shotgun is loaded with #8 bird shot, hardly big enough to stop a Black Lab.

The dog stops for a moment, slightly confused, then continues on. Another shot, and this time the dog, still standing, becomes really confused and of course terrified, thinks these two geniuses have gone insane!!!!!!

The dog takes off to find cover, UNDER the brand new Navigator.

The men continue to scream as they run. The red hot exhaust pipe on the truck touches the dog’s rear end……………….he yelps, drops the dynamite under the truck and takes off after his master.

The truck is blown to bits and sinks to the bottom of the lake, leaving the two idiots standing there with ‘I can’t believe this just happened’ looks on their faces.

The insurance company says that sinking a vehicle in a lake by illegal use of explosives is NOT COVERED by the policy. And he still had yet to make the first of those $560.00 a month payments.

The dog is okay….doing fine.

And to think you thought all Rednecks lived in the South …

Tweet
« The Bottle of Wine
Why Some Men Have Dogs And Not Wives: »