It was 1980 Fall Fair in Orangeville Ontario, Amy was ﬁve and Jody was three. Our main street was closed to trafﬁc as merchants, hawkers, mid-way rides were set up. With a population of roughly 15,000 in 1980, it was a great little town to bring up kids.

The street and the storefronts were all decorated as any typical fall fair would be. It was very busy, and our two kids were enjoying the smells, the ﬂavors and the thrill of the day. 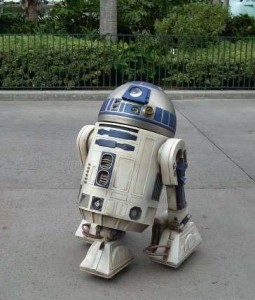 Wandering down the street was a small robot. Remember it was 1980 and Star Wars was still very hot. The robot was very similar to R2D2. It was about Amy’s height and was wheeling around chatting with adults and kids alike. I scanned the sidewalk and the storefronts, I ﬁnally found the person who had the radio control system for the robot. He was wearing a small headset with a microphone and via a two way radio could hear what people said to or about the robot, and he could make his voice come from the robot as if the robot was speaking. It was a fairly clever setup, and this young man had a gift for entertainment.

I asked Cheryl to keep an eye on the kids as I dashed through the crowd to the robot’s keeper. I got his attention and said, “You see those two little girls over there? The tall one’s name is Amy and the other is Jody” His face glowed and the robot headed off to catch up with Amy and Jody who were looking the other way. Arriving behind Amy, he blew a little whistling sound like R2D2 did in the movies, and of course, Amy turned around and found herself face to face with the robot. The robot said “Hello, Amy. How are you?”,. Amy’s face said it all, but she uttered somewhat indignantly, “How do you know my name?” The robot replied, “I know everybody’s name!” The two kids were incredulous.  Jody challenged, “I’ll bet you don’t know my name!” The reply was, “Of course I do Jody!”

The robot and the kids chatted a while longer.

We let the kids believe what they believed that day.

Tweet
« Right Hand Driving – Just BUDGE over if you can.
We’re Hertz – They’re Not »