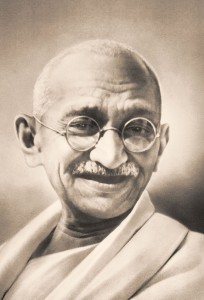 Mohandas Karamchand Gandhi commonly known as Mahatma Gandhi had a challenging life. He walked in rough sandals or bare feet for most of his life. This created a lot of damage to his feet and he was heavily calloused.

He was a dedicated vegetarian, and undertook long fasts as means of both self-purification and political mobilization.

He fasted several times throughout his life to protest the use of violence for any reason. His longest fast was 21 days which must have been terribly difficult.

What is not well known is that Gandhi’s fasts did have an effect on his overall health and his bone strength diminished and he did not totally recover.

Not only did the fasts have an effect on his bone health but also his oral health causing gum infections and the loss of some teeth. One never sees a photo of Mahatma Gandhi smiling or laughing with his mouth open.

These issues led to the development of a special hyphenated word that describes him well. He was a supercalloused-fragile-mystic-plagued-with-halitosis.