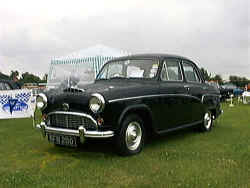 I was eighteen. The year was 1966. It was spring and I was out mowing the lawns of my neighbors trying to earn some pocket money. About half a block down from where I lived was a home occupied by a widow whose lawn I had been cutting for years. On this particular day I was merrily cutting away with my dad’s lawnmower and the spinning blade came to an abrupt stop when it hit a steel water shut-off valve poking its head above ground but well hidden in the tall grass. I pulled and pulled and the machine would restart but it was badly out of balance as I had bent the blade. This was my Dad’s new mower, I was in trouble.

The widow, I wish I could remember her name, came to her door and said, “There are a lot of tools in the garage if you’d like to use them.” I certainly did not want my dad to see the broken mower so off I went to her garage with the hope of finding some tools to help me straighten the blade. In the garage sitting on two or three very flat tires was a 1958 Austin A55 Cambridge. Except for a little dust, it looked brand new. The widow popped into the garage to see how I was doing. She saw me ogling the old Austin. She looked at me and said, “Chris, if you want that old car, please take it.” I looked at her incredulously, as she explained that it was her husband’s car and he had died shortly after he bought it and she did not drive. I had my driver’s license at the time but I did not have my own car. I was in heaven! I looked around the car, when I opened the door the smell of new leather caught my breath. Here was an eight year old car, looked like new and only had 7500 miles on it, and it was mine!

I graciously thanked her, managed to fix the lawnmower and off I went to get help from my dad. Dad walked down with me to see the car and with a boost for the battery, some air from dad’s compressor for the tires, a spray of starter fluid in the carburetor, it started up right away.

Dad then gave me the bad news. He said that I could not accept this as a gift and insisted that I pay her $300.00 for the car. This was about all the spare cash that I had. Dad and I visited the widow and I offered her the $300.00. She said that she would not accept it, but my father convinced her that “it was good for me” and she should take the cash.

We managed to drive the car home; we drained all the fluids and replaced them. The tires were badly perished and Dad, the wise man that he was, insisted that I needed to buy new tires before I could drive it on the street.

The replacement oils, anti-freeze, battery, and four tires drained my poor bank account. I washed and waxed the car and drove it down to its original home to show it off. The widow came out and commented on the clean car and how happy she was to see it out of the garage and in good hands. I told her what I had done to make it ready for the road. She asked me how much I’d spent on tires, battery, etc. I replied “about one hundred and fifty dollars.” She opened her purse and forced $150.00 into my hands saying, “Don’t you dare tell your dad!”.

To the day he died, Dad never knew of the secret between the widow and me.