Home » Humor » Only in New York 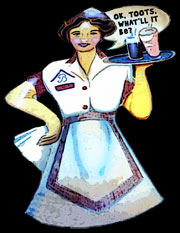 This story contains some X-rated language. If the “F” word offends you then you should skip this chapter. (This is a chapter in my book “Travels with Taffy and Other Tales“

In the early eighties, we headed off to New York City. I was going to a trade show and the family came along for a brief respite. One fine morning we headed out to a NY style diner in Brooklyn. It was about 7:00 am and the place was buzzing with patrons. In typical brusque NY style, we were ushered to a booth along the window and the waitress dropped off four menus.

Each menu weighed a pound or two, was about twenty-four inches high and had perhaps eight pages. The kids had never seen a menu like this. It had more meal selections on it than all of the restaurants in our hometown of Orangeville, Ontario combined! Our kids were learning to read, and we were encouraging them as we traveled to order from the menu themselves. This was a daunting task when the menu was half your height, and when opened up to its full width, their arms could barely stretch that far. We helped them find the breakfast section which was essentially the whole list.

Over to our table came a fifty-year-old mini-skirted waitress whose hips were as wide as our table. Her mini-skirt was less than flattering. Legs tapering from battleship width to her shoe size were not a pretty site. Cheryl and I ordered and we waited as the kids pored over their menus. Gladys, or whatever her name was, our waitress, was getting more and more impatient and the seconds were ticking by. Disaster was about to strike.

After less than about a minute, she looked at our two daughters whose ages totaled less than ten at the time. “Hurry up! Do you think I’ve got all fucking day?”

Only in New York!