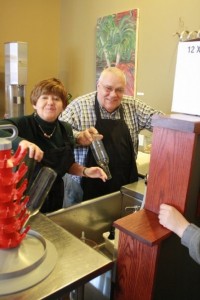 Cheryl and I celebrated our 40th wedding anniversary last September. The actual event was on September 2nd but for those that know us, know that we were organizing ZFest 2009 here in Cincinnati that weekend.

Jody, our younger daughter set up a great event in Columbus on the weekend following ZFest when our lives had quieted down a little. It was a surprise and we were taken to www.CamelotCellars.com near her home and we got to taste a plethora of wines. We selected two, one being a Pinot Grigio and the second was a Merlot. We then were taken to the kitchen or whatever one should call call a wine making room with sinks and stuff. In that room we “made wine”, well we took pre-squashed grapes, mixed them with water and then proceeded to put the mixture into a large bottle. The kind of bottle that we made terrariums with years ago. Remember Terrariums?

The mixture was then put aside along with many large bottles filled by others and the folks at Camelot Cellars took over. We left and were invited back yesterday to bottle that wine we created in September.

Yesterday, was the icing on the cake as we got to go a’bottlin. We got to was bottles, fill them, cork them,  label them and then finally added the fancy hat on each bottle.

We had created labels, emailed them to Camelot Cellars and they printed them before we arrived.

Soon we’ll get to open a bottle or two and taste the fruits of our labor.

One thought on “Please let’s not whine! We’re making wine in Columbus Ohio!”