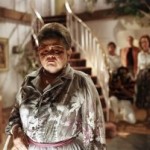 Things you read, smell, taste, trip over, find or see can trigger memories of days gone by. This posting was triggered when one of my kids sent me a message on FaceBook that Zelda Rubinstein, who played the medium, Tangina in Poltergeist had passed away. She was a small medium.

For this story, it was circa 1984 and we living in Salt Lake City. I had transferred within Varian to become their product manager for power grid tubes at the Eimac division in Salt Lake. Our new home, well new to us came with cable TV with several premium channels including HBO. It was kind of comical because in "those days" the control of which channels were visible in the home were determined by which traps and filters were installed by the cable installer. Since the advent of digital cable, those days are far behind us. The previous owner of our home must have paid for several premium channels and the cable TV company had not come out and changed the installation. We received several premium channels. The comical thing was that every few months during the years we lived in Salt Lake, the cable company would call and ask us if we wanted to "upgrade" our cable service and get some premium channels. We of course graciously declined their kind offers. We felt that paying for an upgrade would degrade our service. 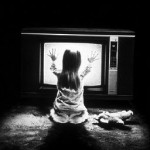 I'm digressing again. It's always necessary to "set the scene" as the whole point of this posting is the scary movie. Poltergeist was on HBO and Cheryl and I sat down to watch it one evening, our kids Amy and Jody (about 9 and 7) at the time were in the room and we felt that Poltergeist was inappropriate for them to watch. We asked them to go to their room(s) so we could watch the movie. The kids said, "We watched Poltergeist this morning." We gave them free access to the TV and did not control what they watched very well. Poltergeist had been playing for a few days and the kids had watched it that morning while mum and dad were either napping or simply involved in making breakfast, painting a wall, training the dog or any such thing that did not involve supervising our kids. We or perhaps they are indeed very lucky that they turned out so well.

Sorry, I'm digressing again. As the kids said that they had already watched the film, we allowed them to stay in the room. Those of you who remember Poltergeist will remember the classic scene where the evil tree breaks through the window in the kids room. As this scene begins on TV, Jody, our seven year old was cuddled up with mom and said "Don't watch this part mum, it's really scary."

For those of you who'd like to see the scene and perhaps re-live the moment. I did find the scene on YouTube.

Tweet
« Is it your time to die? This guy lives to see another day!
Do you know where Bockwurst comes from? »