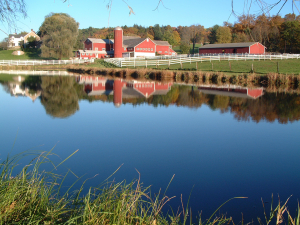 A newspaper reporter heard about an amazingly clean farm north of the city. She felt that there might be a story here so on a quiet afternoon she drove into the country to find and visit this farm. She was somewhat incredulous when she found the farm. The long meandering driveway up to the farmhouse was immaculate. The fence had been recently painted and it seemed that every piece of gravel in the driveway had been placed there to make the driveway a sight to behold. The sign on the gate said “Welcome” so she carefully drove up the driveway ensuring that she did not spin a wheel and disturb the gravel.

As she reached the farm yard she saw cows and horses that appeared to have been groomed within the last few minutes. The place was spotless, the barns were red and the doors outlines in white that made the farm simply beautiful. 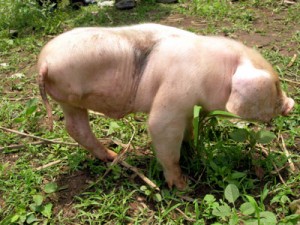 As she stopped the car, she noticed a sight that surprised her, it was a three legged pig that was simply filthy and not walking very well. It took a step or two and fell over. She guessed that the filth on the pig was a result of it falling over, time and time again.

She knocks on the farmhouse door to interview the farmer. He appeared in the doorway, as expected in clean, freshly ironed bib overalls. She complimented the farmer on the amazing farm and asked if he would agree to an interview and allow her to take a few photos for the paper. He agreed.

As the interview continued she finally asked about the three legged pig. The farmer said “That there pig is a family pet and he’s really smart. We’ve taught him all kinds of tricks, like ‘Roll Over,’ ‘Sit’ and ‘Fetch.’ As to that last trick, ah kin be sittin’ on our front pouch and when the weekly newspaper comes, ah jest tells the pig to ‘Fetch’ and he goes gits the paper and brings it to me.”

“Wow!” exclaims the reporter. “That pig sure is smart.”

“Not only is he smart, but he’s somethin’ of a hero,” the farmer tells her.

“Well,” says the farmer. “That there pig, being the family pet, sleeps at the foot of our bed. One night when we were all sleepin’, a fire breaks out in our farmhouse. The pig started squealin’ and fussin’ and wakes us all up so we were able to git out of the house.”

“But you ain’t heard the whole story,” the farmer replies. “We all git out of the fire that night except my baby girl. That wonderful pig went back in the burning farmhouse and dragged the little one to safety and saved her life.”

“And the pig lost his leg because it was burned in the fire?” asks the reporter.

“Well, not exactly,” answered the farmer. “Ya’ see, a pig like that, one that is so smart, so heroic,  so valuable. You don’t eat a pig like that all at once!”