I was reading about a friend’s recent tire disaster with his Z4 Roadster it made me recall the time we re-tired in Utah in 2007.

Cheryl and I were traveling back from the west coast with a group of roadsters. We were on an amazing life changing tour that we called the Roving Roadsters Route 66 Tour. Thirteen people in eight roadsters made the journey to LA, three Z3s, three Z4’s and a couple of Pesky Porsches. 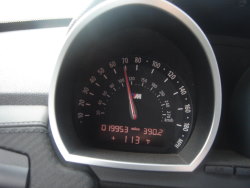 The tour took us from Chicago to Los Angeles where we turned right, visited Monterey, San Francisco, Napa Valley and then headed east via Modesto, Yosemite, Lake Tahoe, Several national parks in Utah and Colorado and headed home. Cheryl and I completed 17 days and 17 nights, stayed in 17 different hotels and completed 7,700 miles. I think we had our top up only for a few miles in Arizona when the temperature hit 113 degrees.

As usual I am digressing. It was at Bryce Canyon in Utah that our tale of re-tiring begins. It was midafternoon and the five remaining roadsters were at Bryce Canyon National Park in Utah. We had lost a couple of roadsters in LA and San Francisco as their owners wanted to visit with friends and family. In Bryce Canyon is where we lost a rear tire on our Z4. Inspection revealed that the tire was essentially shredded and irreparable. We were fortunate in some ways as we were driving at about 35 mph when the tire blew. Our Z4 carried no spare and our fix-a-flat gizmo and tire pump was useless.

Summoning help was a challenge as there was no cell phone service. After we waited for a couple of hours for a park ranger, we gave up waiting, Larry and Carol headed to the ranger station about a dozen miles away to learn that the rangers stop patrolling the canyon at about 4:00 PM.  At about 4:30 PM, a ranger showed up, he radioed to the ranger station and a tow truck was dispatched from a tire dealer in the town of Bryce. I believe we got back to Bryce with the Z4 on a tow truck at about 5:30 PM. After a few phone calls to BMW Assistance, BMW wanted to tow the car to Henderson NV or Salt Lake City, each about 300 miles away to have it inspected and repaired. This would have cost us several days of touring time. We chose the challenging way out. The tire dealer was also a Hertz Car Rental dealer. 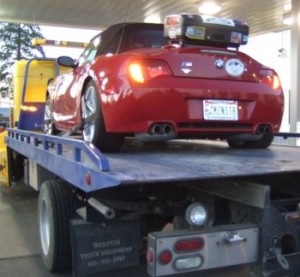 A car was rented at about 6:30 or so and Cheryl and I headed for Salt Lake City planning to find a tire in Salt Lake and drive back. Exhausted and tired we stopped in a motel just south of Salt lake just after mid-night. We fell asleep in thirty seconds or less. Awaking early we headed to the BMW dealer south of Salt Lake City. While parked in the BMW Dealer’s lot until about 8:30 AM when they opened to learn that they did not have our tire in stock. A few phone calls later, we found a sympathetic Sears store that was able to get tires for us. Their warehouse was on the north west side of Salt Lake and we were on the south east side and it was rush hour! We decided to pay for the tires and drive to their warehouse and get the tires. Breaking a few speed limits, we managed to be back in Bryce with the tires installed and balanced by about 3:00 PM.

Our friends, remember them, had traveled on towards Mesa Verde National park in Colorado, passing through Capitol Reef, Glen Canyon and Natural Bridges National Parks. Now we had to catch up somehow. We had driven about 300 miles already that day in the rental car and now we had about 400 miles ahead of us to get to Mesa Verde to catch up with the other roadsters.

The first hundred miles or so, we took it easy to allow the new tires to settle on the rims and soon we were speeding across Utah at undisclosed speeds in our attempt to catch up. By about 6:30 or 7:00 we had reached Blanding Utah about 280 miles from Bryce and we now had cell coverage, as we were leaving Blanding, Cheryl called our friends to learn that they were about 10 miles behind us, enjoying dinner in Blanding. We did a U-turn, our first for the day, to join them for dessert and a snack and off we went as a convoy to Mesa Verde. The others had enjoyed some stops along the way to see the riches of Utah. Cheryl and I had simply seen a blur. We had lived in Utah in the eighties and seen it all before, but we would have liked to see it again!

Re-tiring in Utah was a challenge.

Tweet
« Trying to do the docent thing!
The Sales Meeting and the Trip to Wrigley Field »