Well now that I have your attention, please read on. 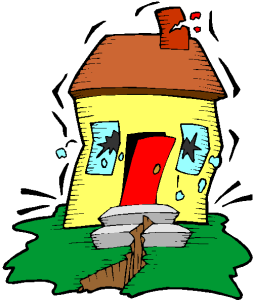 There comes a time in the life of a human being that one hears something funny, files it away and never thinks of it again until a little trigger comes along and dislodges a neuron or two in the brain and lets the memory loose.

The recent earthquake in Napa/Sonoma in Northern California was such a trigger for me.

In the early ’80s, I lived and worked in Utah in the Salt Lake City area. The climate was great; the mountains provided wonderful scenery; and life was good. Of course, as an individual who liked the odd beer or perhaps a margarita, there were some other issues but they became easier to deal with as I became aware of all the silly rules. There, I digressed and got off track, and for that I apologize with my tongue firmly planted in my cheek.

Anyway, it was my habit in those years to get to work very early in the morning. I was in marketing, and we had customers in Europe. Salt Lake was on Mountain Time, putting it 8 or 9 hours out of sync with Europe depending on the Daylight-Saving Time thing, which at that time started on different dates on both continents. How brilliant is that?

One particular day at perhaps 4:30 a.m., we had a minor earthquake in the Wasatch Mountains east of the city. Many people were awakened in the same way as those in Napa and Sonoma were awakened August 24, 2014.

I arrived at work at about 6, a.m., which was normal for me and a few others. There were many of us who came in early to get our days started. At about 7:15 or so, a few of us would gather in the cafeteria for coffee, perhaps some toast and a muffin or doughnut, and we’d chat about something. As you can imagine, that morning we were fervently spinning our best personal stories about the earthquake that had occurred just a few hours before.

One of the guys, I’ll call him Bob, because that was his name, showed up a little late and arrived at our table at about 7:20 or so, for Bob that was very late.

He sat and spoke immediately and said, “Wow, what a morning? Unbelievable!” We were quizzical and of course one of us had to ask Bob to explain his outburst.

Bob generally was a man of few words and he said, “Well, I awoke early today and the house was quiet and I had an erection and at my age, that is a rare thing.” Bob was probably 70 at that moment. He continued and said, “I looked over at my wife’s side of the bed and she must have been warm overnight, she’d thrown the covers off and she looked, I guess I might say, ‘available’.”

We were all smiling and of course wondering if this might be another of Bob’s tall tales. He gathered his thoughts and said, “Yup, I looked over at Milly and carefully mounted her.” He continued, “All of a sudden, the room started to shake. I thought I was about to have one of my best orgasms in over 30 years. My mind was telling me that the shaking was in my head and the upcoming orgasm was the reason.”

We were perhaps finding this recounting to be, shall we say, a little over the top and maybe even a fabrication. None of us had had an orgasm like that in our lives. Bob continued, “Damn it, all of a sudden the plates started to fall; the pictures were falling off the walls; and Milly’s makeup was falling to the ground from her makeup table.” We had no idea where Bob was going with this tale and then he said, “All that damned noise and commotion woke Milly up and ruined the whole thing!”