Home » Humor » Something not so Trivial in Australia – 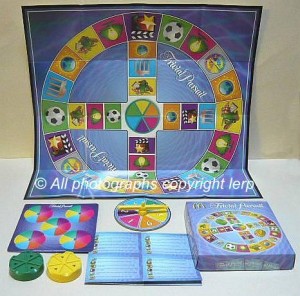 The origins of the TRIVIAL PURSUIT® game can be traced back to a blustery day in Montreal, December 15, 1979, when two friends, Scott Abbott, sports editor with the Canadian Press and Chris Haney, photo editor for the Montreal Gazette, engaged in a friendly argument over who was the better game player. This led to the friends creating a board game of their own. It was introduced in early 1982. After numerous setbacks and hard times, things ﬁnally began to go their way. Chieftain Products Ltd. became their Canadian distributor beginning October 1, 1982, and in 1983, Horn Abbot introduced the TRIVIAL PURSUIT® game to the Selchow & Righter game company for the United States market. The result? In 1984 alone, over 20 million games were sold. (Paraphrased from www.trivialpursuit.com)

For me it was 1984, Cheryl and I had bought our ﬁrst Trivial Pursuit game, and we’d moved to Utah. The game was played day after day, weekend after weekend amongst our new friends in Utah.

In 1984, I hopped on a plane and ﬂew to Australia for a business trip. While in Sydney, I was invited to stay at the home of Peter, Gabrielle and Anna Kirkwood. Peter was Varian’s sales manager Down Under, and I was a product manager for Varian’s Eimac division in Salt Lake City. Gabrielle was Peter’s gracious wife and Anna, their new daughter, was a few months old.

I really enjoyed the trip and their home. Where we might see sparrows, ravens, robins and blackbirds in our backyard, their backyard had parrots, mynah birds, cockatoos and other exotic birds.

Peter and I visited several customers and as our week was coming to a close, Peter and Gabrielle took me to Balmoral Beach or Immoral Beach, the locals called it Immoral Beach as many of its sun bathers were nude. From there we went to a seaside resort to ﬁll out the week. As we sauntered past some boutiques, I happened to notice a game box of, you guessed it, Trivial Pursuit in a store window. I pointed it out to Peter and Gabriella, and they had not yet heard of it. I decided to buy them a copy as a thank-you gift from a Canadian living in the USA visiting Australia.

That evening we cracked open the box. A couple of friends of Peter and Gabrielle dropped in and we played Trivial Pursuit. I ﬁgured I was in no danger of losing as by now I’d been playing for many months.

I lost abysmally! The Aussies were just too damned intelligent for me. Perhaps it was because their knowledge of Australia was better than mine. That day the questions were about Australian Geography, Australian Sports and Leisure, Australian History and Australian TV and Movies!

How was I to know that those clever game making people had made an Australian version for the Down Under market?