I was in my teens and in high school. Which year? I’m not sure, perhaps ninth grade. One summer I was invited to spend a few weeks at a friend’s summer cottage on Lake Echo in the Laurentian Mountains north of Montreal. My friend was Peter Rawlings. He had an older brother, George, named after his dad and his mum, Winnie. This was a great place to be. We could water ski, swim, play in the recreation hall that was co-owned, I believe, by the cottagers around the lake. Life was good.

After being there a week or two, a friendly woodpecker decided to take roost near the cottage. It was the noisiest damned bird you’d ever want to meet. Each morning at sunrise which was roughly 4:30 am as I remember it, the woodpecker would attach itself to the wires supporting the metal, yes metal chimney and proceed to peck away at the metal chimney with all its might. The noise inside the house was absolutely deafening. Each of us went out and tried catapults, stones, hosepipes and whatever else we could think of to drive the damned bird away. It was really beginning to have its effect on several of the cottagers near the Rawlings’ place.

Something had to be done! Mrs. Rawlings (Winnie) called her husband George in the city and told him of the situation. He would come up to the cottage on weekends, and like many moms in the area, Mrs. Rawlings took care of the kids and the cottage during the week. She was always a happy smiling woman who really enjoyed life but the woodpecker was getting her down!

Friday night Mr. Rawlings and his son, George, who was a little older than Peter and me showed up at the cottage armed with a 12 gauge shotgun. The bird was gunna go! 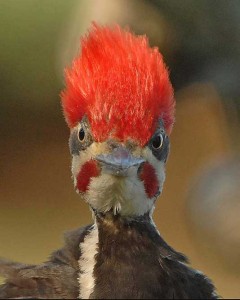 The next morning, like clockwork, the woodpecker started his tat tat tat on the chimney. One by one we traipsed outside in bathing suits and pajamas to see Mr. Rawlings loading the shotgun and taking aim at the hapless creature. The trigger was pulled; the noise was devastating, probably the loudest sound I had ever heard. Remember, earlier I mentioned we were at Lake Echo so we got to hear it again and again as it bounced around the hills. Firing a shotgun at 4:30 on a Saturday morning was not something the folks in the area expected. We would be hearing about the shotgun blast for weeks to come.

Back to the bird; as we recovered from the blast and could focus our eyes, it was plain to see that our friend the woodpecker was flying away seemingly unscathed, and the chimney, now in several pieces, was falling to the roof dumping black soot everywhere.

We kidded Mr. Rawlings for some time after reminding him that firing ahead of a bird is only needed when a bird is in flight! We, the kids, were put to the chore of removing what was left of the chimney and cleaning up the soot as best we could.

The following Friday, Mr. Rawlings showed up with several lengths of shiny, new metal chimney pipe, guy wires and tools. Saturday morning was spent helping repair the chimney. There was still a lot of humor in the air. By noon the job was done and off we went swimming and water skiing and whatever else we did for fun that great summer.

Sunday morning we awoke at 4:30 am to the sound of that damned woodpecker trying out the new chimney!

Excerpted from my book “Travels with Taffy and other Tales“

Tweet
« The words and phrases of my youth.
The Perfect Storm – Empathy and Logophile. »