It was many years ago when I returned home on a Saturday afternoon to see that our neighbor’s home had a scaffold in the driveway with the top of the scaffold just below their living room window. To describe the scene properly, their driveway led to a garage which was below the living room. The scaffold needed to be about 10 feet high so that one could work on the front of the house or more specifically be high enough so that one could paint the frame of the window.

None of what I said above is of much importance. The important part that their living window was perhaps eight feet across and written on the window in letters a couple of feet high were the words “THAT’S NICE”

You’re probably wondering why those words were there.  I know, I was more than curious. This was in the early seventies so I don’t have a cell phone record of this unusual sight.

That evening, our neighbors, Mike and Joan were not to be seen on their deck or elsewhere, where one would normally find them on a warm evening. I wanted to know more and I went next door and rang the bell. Mike answered the door and I stepped in. We knew Mike and Joan very well so I simply wandered up to the kitchen. Mike followed, grabbed a couple of beers and I asked him where Joan was? From the room next to the kitchen came a reply from Joan. The reply was nearly instantaneous and Joan said “I’m in the fucking living room!” Mike almost smiled and I became more quizzical and asked about the writing of THAT’S NICE on their living room window for all to see.

Joan finally came to the kitchen and it was somewhat obvious that the two of them were at odds and Joan broke the silence, “Do you not know the joke about that’s nice?” she went on to tell me that last year, another neighbor had done the same thing with a sign on their living room window. We were new to the neighborhood and were uninformed.

Somehow, this broke the ice and then Mike and Joan started to tell the story of the day.

Just a bit of history for the day. Mike had set up the scaffold but found that they didn’t have the right brush or perhaps enough paint. He had headed for town mid morning to buy the needed materials and somehow he got distracted, went to the local tavern with a buddy or two and came home a little tipsy with no paint or brushes? Joan had sent him out to shop again and had painted the THAT’S NICE on their window with some paint she found in the garage.

So now you know some of the story.

The two of them started to recount the THAT’S NICE story.

Two southern ladies are sitting at the country club by the pool.

The first southern lady says, “When I had my first child, my husband bought me a diamond ring.”

The first lady says, “When my second child was born, my husband took me on a cruise.”

The first lady continues, “When my third child was born, my husband took me on a trip around the world.”

And the second lady says, once again, “That’s Nice!”

The first lady asks, “Well, what did your husband get you when your first child was born?”

The second lady replies, “My husband sent me to finishing school.”

The first lady asks, “Well why did he do that?”

And the second lady says, “So I could learn to say ‘That’s Nice,’ instead of ‘FUCK YOU’!”

So, if you hear me say “That’s Nice!”, it’s probably code for FUCK YOU. 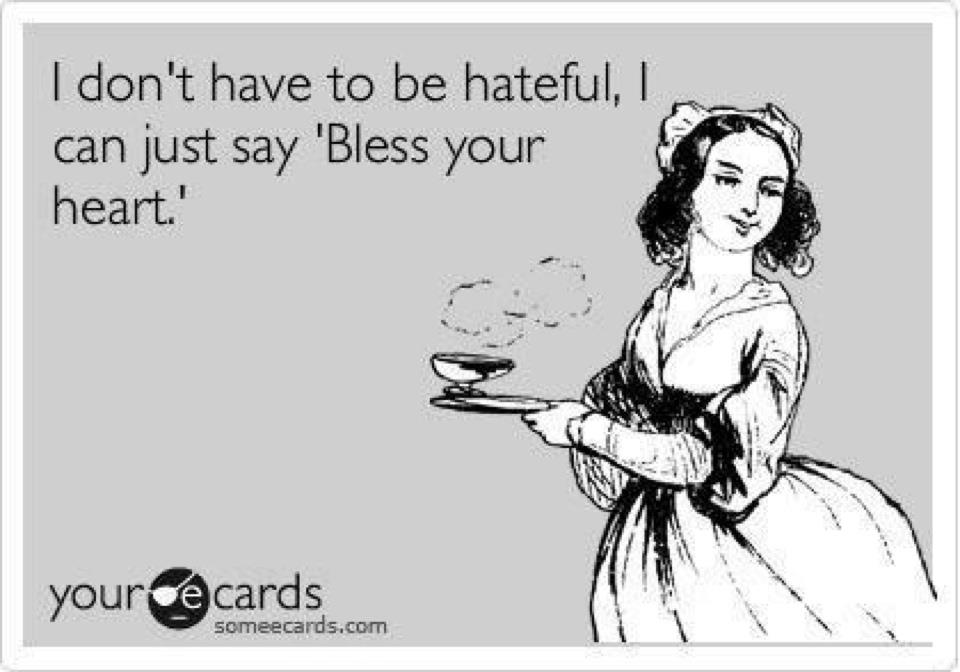