Let me start with:

During a company’s recent password audit, it was found that a blonde employee was using the following password: “MickeyMinniePlutoHueyLouieDeweyDonaldGoofySacramento”

When asked why she had such a long password, she said she was told that it had to be at least 8 characters long and include at least one capital. 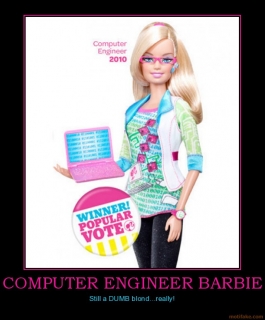 It was a few years ago that I purchased a Generation One iPhone when they first came out and I tried to use it for perhaps 6-9 months and finally stuffed it in a drawer, called ATT and canceled my service and returned to my trusty Blackberry. My challenge with the iPhone was email, email, email. The POP email interface sucked and they did not have an email system to push emails to my iPhone. I found the email program(s) on the iPhone simply inadequate for my use and I coined the phrase that the iPhone is (was) “the digital equivalent of a dumb blonde”. Everyone wants to try it and when you get close enough, you find that beauty is only skin deep. Obviously I’m not 100% correct on this as we all know that a gazillion iPhones are in use today. I have not tried one of the newer ones and I probably never will. I think I’ll be waiting for the next generation of Android phones and give that a try. Right now my Blackberry Tour is doing great!

Some of my friends have ordered the new iPad as have a bunch of others. I’m gunna wait for the jury to come in before I jump in. I travel with a laptop or two and my trustworthy Blackberry. I’m waiting to see if the iPad is the digital equivalent of a dumb blonde. Only time will tell.