Steve is shopping for a new motorcycle. He finally finds one for a great price. The motorcycle is missing a seal, though, so whenever it rains Steve has to smear Vaseline over the spot where the seal should be.

Steve’s girlfriend is having him over for dinner to meet her parents one evening. He drives his new motorcycle to his girlfriend’s house.

She is waiting outside for him when he arrives. “No matter what happens at dinner tonight, don’t say a word. Our family had a fight a while ago about doing the dinner dishes. We haven’t done any since… and the first person to speak at dinner has to do them.” 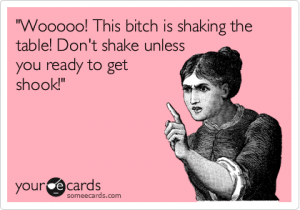 Steve sits down for dinner and soon notices that his girlfriend wasn’t exaggerating. It is just how she described it. Dishes are piled up to the ceiling in the kitchen and nobody is saying a word. Steve decides to have a little fun. He grabs his girlfriend, throws her onto the table and has sex with her in front of her parents. His girlfriend is a little flustered, her father is obviously livid, and her mother is horrified. Yet, when Steve and his girlfriend resume their places at the dinner table, nobody says a word.

A few minutes later, Steve grabs his girlfriend’s mom, throws her onto the table and does a repeat performance. Now his girlfriend is furious, her father is boiling, and her mother is a little more pleased. But still, there is complete silence at the table. 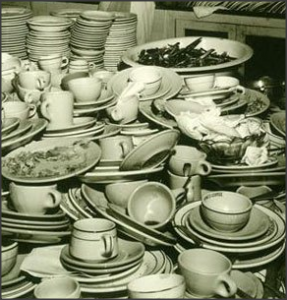 Suddenly, there is a loud clap of thunder and it starts to rain. Steve remembers his motorcycle outside and so he jumps up and pulls his jar of Vaseline from his jacket pocket.

With a look of terror in his eyes, the girlfriend’s father backs away from the table and yells  “Okay, enough already, I’ll do the damn dishes!”

Tweet
« The ATM Drive Thru – Man vs Woman, The ATM Pants Utilization Insufficiency
The Drinker’s World »