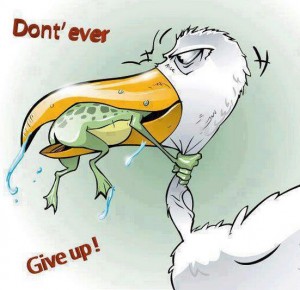 This is a short tale of a frog that was minding his own business and hopping along the bank of a beautiful brook in the swamp. A pelican noticed the frog and before the frog could take evasive action, the pelican simply gobbled him down in a single swallow.

The frog, suddenly was plunged into complete and utter darkness and his surroundings were just slimy, warm and black. He became very afraid. He slid and slid and wriggled and wriggled until he found a tube that he guessed might be the way out. He followed the tube which was very twisty until he saw pink circle below him. He gradually was able to push his head through the pink circle and there was a rush of fresh air. He looked out and below him he could see the brook and pond that was his home. Air was rushing by and he screamed “Where are we?” and the pelican a little surprised to hear a voice said “We’re at about 10,000 feet above a stream.”. The frog yelled back “You wouldn’t shit me, would you?”