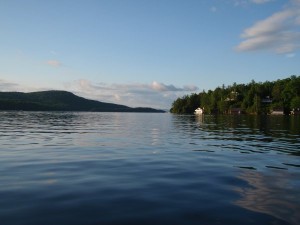 The View from the Cottage (Maybe)

I was nineteen, the year was 1966, and three friends, Roger Pelletier, Dennis Albisser, Steve Hand and I rented a cottage for the summer. The cottage was on Fitch Bay in the Eastern Townships near Montreal. The cottage came with a small cedar strip powerboat for cruising and water skiing. Each Friday after work or earlier if we could get away, we gathered at the cottage, sometimes car-pooling and sometimes we’d arrive at different times throughout the weekend. As an aside I should tell you I also met Cheryl, now my wife on August 6, ‘66 on a blind date. I took her to a party at the cottage. I did manage to get her home to her fuming father on Sunday morning at 6:00 AM but that’s another story.

There were four main responsibilities each punishable by death if missed or forgotten. One was beer, two was beer, three was gas for the outboard motor and four was food. Yes, beer was number one and two. I was the gas guy.

I drove a 1958 Austin A55 Sedan. She was my first! The car was eight years old and when I bought it in the spring of ‘66 for $150.00 net. It had been barely driven and had only 7500 miles on it. The car had a trunk (boot if you’re British) and was the perfect size to hold a thirty-gallon drum that we used for gas for the outboard. I actually put in some straps to prevent it from rolling around.

My job each weekend was to buy the gas. I got free beer and food for my troubles. To save time on the valuable weekend, I would normally fill it up a day or two before so that I could make the trip to the cottage unimpeded. Once in a while, I’d forget or be pressed for time and I’d fill up at a country gas station about ten miles from the cottage. It was a warm and sultry evening as I recall and on the verandah of this gas station was an old man in a rocking chair enjoying the evening air. I jumped out of the car, popped the trunk and began to fill the tanks, one in the car and one in the trunk. The old man showed little interest in what I was doing or so I thought. I had first put seven or eight gallons in the car’s tank to top it off and then began filling the drum in the trunk.

I looked over to notice that the old man was now staring at the gas pump and was watching the numbers click by. At around the ten gallon mark he began to show increasing interest. I had not yet figured out why. I was trying now to watch him without appearing inquisitive.

As the meter on the gas pump clicked past 25 gallons he was becoming extremely interested. He slowly extricated himself from his chair and as casually as he could sauntered over to my car. He was looking on the ground near the fill spout of the car. He continued his casual walk and circled around the pumps and my car. His eyes finally landed on the thirty gallon tank.

A look of relief filled his face. He sauntered once again, back to his chair and resumed his rest.

Tweet
« Please let’s not whine! We’re making wine in Columbus Ohio!
How do you like your coffee? »