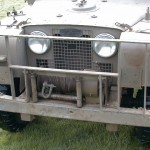 The RAF (Royal Air Force) at Goose Bay flew Vulcan’s on “nap of the earth flights” over the Canadian tundra. These were training missions as the tundra was similar to that of the USSR. The planes were equipped with terrain following radar which allowed these special aircraft to fly at a fixed altitude above the land below. Sometimes the altitude was below a thousand feet. As the ground undulated under the aircraft the aircraft automatically rose and fell in cadence with the soil below. Although these were seasoned air crew, air sickness was a reality for some of these young men who were being challenged in this way for the first time. We befriended many of the ground crew who were permanently stationed at Goose Bay. We did not meet many of the pilots and air crew dashed in from the UK, flew around for a while, puked all over their airplanes and flew home.

The ground crew were our friends and at any one time there would always be one or two RAF boys in our home around the clock. The dispatch center at the airbase called our place first looking for staff if some were needed. These were young men in their late teens or early twenties. Cheryl and I were also in our early twenties and we made friends easily. 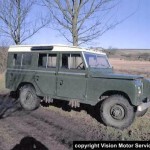 The RAF boys had access to Land Rovers! Land Rovers were fun vehicles. Land Rovers could take you up the logging trails and tracks to lakes and rivers. There were fish in those lakes and rivers. This was before the days of everyone owning an SUV. There was always a waiting list for the Land Rovers. The officers always seemed to be on the top of the list, and our friends, the ground crews who got to clean up those planes we talked about above, were always on the bottom.

One Saturday in June, we were lucky. The Land Rover was booked, our friends went to the NAAFI (the food service people for the RAF) and got food for the day trip. We had bread, potatoes, beef, a plethora of vegetables. Cheryl and I had the cooking gear and the pots.

The Land Rover was a ten seater and was equipped with shovels, axes, a winch, and we felt well prepared. Two couples, Cheryl and I and our friends and four RAF guys took off up the logging road which might get you to Churchill Falls if the road were not washed out in 10 places every spring. We were on our way by about 10:00 AM. An hour later we found a clearing with a small shed and there we set up the cooking gear. These boys had brought a huge chunk of beef and with the veggies we were to make a stew. We set up the primus camp stove, placed a huge pot on top, threw in the ingredients for a fine stew, and we set off up the road a bit further to the lake we knew was there. The pot would boil for a long time.

It’s hard to describe quite how rugged this area was and is. We were on a logging road which at best was two vehicles wide. Most of the road was really only suitable for one vehicle at a time. We were only about forty miles up the road. This would be a very long walk if things went awry and they nearly did.

We parked the Land Rover on the side of the road close to the edge in case another vehicle needed to get by. We hiked in to the lake which was about a mile away up a track known to a couple of us. We fished for an hour or so and headed back to the Land Rover. I said we were “fishing”. An old timer once told me that they’d call it “catching” if you actually caught fish.

As we approached the road, we were greeted by a sorry site. The wet road had collapsed under the Land Rover and she was laying on her side almost horizontal in the ditch on the far side of the road. As I mentioned above it was early June, our food was cooking a few miles away, our truck was on its side, and to add insult to injury, it started to snow.

To use the British vernacular, “We were in quite a pickle.” We managed to get into the Land Rover and get the axes and shovels. A few trees fell to our axes and we began the job first of righting the truck so we could start the engine and take advantage of the winch. With a few scratches on our bodies, our egos and the Land Rover, we got her upright!

We pulled the cable from the winch to find that it was too short to reach the woods on the far side of the road. One of the guys had a great idea. We dug a hole in the middle of the road and jammed a tree trunk in the hole. The log was one that we’d used to persuade the truck to come to level. With the winch pulling, two or three guys trying to keep the log in the hole and with the four wheels drive grinding away, we slowly managed to get the truck back on the road. We’d consumed a couple of hours, we were cold, tired, wet and hungry. The truck was pointed west on a very narrow road, and we needed to go east. By now three or four inches of snow had landed, and we literally weren’t out of the woods yet.

Remember our lunch was still cooking on that Primus stove a few miles back.

I got the job of starting the drive back. With the other people yelling, “Stop”, “OK”, “two more inches”, “watch out” or “Oh my God!”, I managed to turn the Land Rover around where it stood. The road was roughly the same width as the length of the ten seater truck. Everyone jumped in and off we were to go. The snow was more like sleet and the truck was icing up. I turned on the windshield wipers to learn that they failed to function. Eight people in a Land Rover with the windows fogging up and no windshield wipers! The Nixon term “expletive deleted” had not been created yet, but I could use it here to pass on what was being said by the group. We had a solution. We took a piece of stout string, passed it out one of the right front passenger vent windows and tied it to both wipers and then had it return into the right vent window and tie a knot. This allowed the front seat passenger to assume the role of windshield wiper motor as we drove along. At least we had had the foresight to knot the string with a bow inside. One could not open front doors unless the rope was untied.

We reached the clearing where our stew was simmering on our propane stove. This was truly the high point of the day! It was still simmering and with the extra couple of hours cooking, the stew was wholesome and perfect. We ate heartily with the snow still falling, still forty miles from home and the sun was setting. God I hope the headlights work! Well they did, the lights that is, and we proceeded home. Five miles or so down the road, we came across the stationary tail lights of another vehicle. As we approached we were to see a pick-up truck with its left front wheel and most of its fender in the ditch on the left side of the road, the water in the ditch covered the front of the pickup and also the brake and gas pedals in the cab. A man and his ten-year-old son were huddled inside trying to stay out of the water.

The man had seen our food cooking and westbound tracks in the road and assumed we’d be back sometime. Fortunately for the two of them we did happen along. Within minutes we winched him out and had the truck back on the road pointing east. We were also pointing east and we were behind him. Were it not for the fact that his battery was flat, we would have been on our way. Out came the jumper cables, we were very well prepared. Had they been long enough to reach from the front of our truck along the length of his to his engine compartment, life would have been better. Remember the narrow road part.

Out came the tools and the Land Rover’s battery. We got the pick-up started, charged its battery a little through the cables and with luck reinstalled the batteries back to their original places and now we were off. The convoy of two traveled back to the Goose and by midnight we were all safely tucked in. All were exhausted, muddy and tired, but at least we were not hungry and we had no fish to clean before we went to bed.

Tweet
« How fights start…
The Flat Tire and the History Test »

2 thoughts on “The Land Rover Saga”