I checked with Wikipedia and they list the Law of Unintended Consequences as “an adage or idiom that can be stated as follows: ‘Any intervention in a complex system may or may not have the intended result, but will inevitably create unanticipated and often undesirable outcomes’.In common usage, it is a wry or humorous expression warning against the hubristic belief that humans can fully control the world around them.”

My story is a little different as you might expect. Each day at roughly 4:00 PM I usually enjoy a small glass of Bourbon on the rocks. We have a bulldog named Diesel who each day a little after 4:00 sits impatiently waiting for the ice cubes from my glass. It’s become a daily ritual.

Well yesterday was my birthday and I received an uncommon gift from my elder daughter and son-in-law. The wonderful and thoughtful gift from a company called www.uncommongoods.com was a pair of unique whisky glasses and some soapstone rocks that one chills in the freezer. The rocks of course replace the rocks made from frozen water  that we’re all familiar with. The idea seemed great, yesterday evening, I placed the soapstone cubes in their cloth bag in our freezer.

At 4:00 PM today. Cheryl was kind enough to bring me a glass of Bourbon with the uncommon rocks, the drink was great and as expected the soapstone rocks did not melt, diluting my drink. 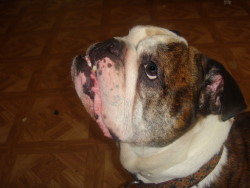 The challenge came when Diesel (our bulldog) expected his normal share of ice cubes! Does anyone speak dog? I need to explain the unexpected consequence to him!