I probably should have called this post “Those infernal revenooers!”

We flew south for a holiday in the spring of 1971 which was our second spring in Goose Bay. Upon our return, we took a taxi from the airport to our home to find “crime scene” tape on our front and back doors and a tag on the door knob requiring us to contact the local R.C.M.P. (Royal Canadian, we get our man, Mounted Police) detachment prior to entering our home. We took our bags from the taxi, placed them in our car and I drove down to Happy Valley to meet with the police. 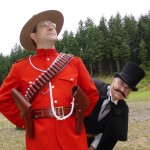 We Get Our Man!

Our neighbor was also our landlord and of course had keys to our home. We had no idea what this was about. Well it turned out that our neighbor’s seventeen year old son had been found with some of his friends in a car asleep and all were totally drunk. When they were questioned about the alcohol and where they got it, they admitted to breaking into our home and taking virtually all of our booze. Our problem came a few seconds later when the R.C.M.P. officer asked if the bottles that had been taken from our home had been purchased legally in Canada as they could not see any tax stamps on them. I explained how that when our various friends would come to visit our home, they would invariably show up with a bottle of their favorite booze. Most would leave partially full bottles when they left. I remember the sergeant had a sense of humor when he said I assume that it must have been because that they could not take open liquor containers home in their car. I assured him that his assumption was correct. 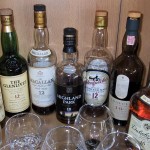 He then went on to explain that it was a serious breach of the customs laws for us to have alcohol in our homes that had not been purchased legally in Canada. He then gave me two options. He said, “Mr. Cane, you can go to our kitchen with one of our constables and pour the contents of the bottles that we found in your home down the drain or we could charge you under the Customs and Excise Act for illegal possession of alcohol.” I asked him to repeat his statement as I needed to be sure to choose the correct answer. A few minutes later I was emptying ten to fifteen or so partially full bottles of some of the finest booze in the world down the drain in the R.C.M.P. detachment’s kitchen. It seemed like such a waste. Somewhat relieved, we headed home. We vowed never to store alcohol in bottles without tax stamps on them in our home again. I worded the previous sentence carefully. The next day a couple of my friends and I went to the dumpster behind one of the local Canadian bars and found many suitable bottles with tax stamps on them.

We might have had Dewar’s scotch in a Ballantyne bottle or perhaps Beefeater gin in a Tanquaray bottle from time to time but who really cared.

Well I guess that’s enough about alcohol for the time being. Writing this chapter has made me thirsty.

Tweet
« Introducing “The Goose”
Why men should not give advice! »