Home » Humor » The Pelican, crane, heron or stork, and the Frog 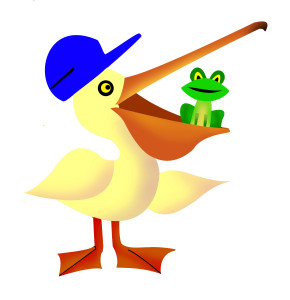 I heard the other day about a frog that had been swallowed by a Pelican, or perhaps it was Crane, Heron or even a Stork. The actual type of bird doesn’t make one bit of difference to this tale. What happened was quite surreal. The frog was on the pier, or maybe a wharf, again it really doesn’t matter where he was, but in one quick motion he was picked up and swallowed whole.

Now we know that frogs can hold their breath for long periods of time and this is exactly what happened. I thought about typing hoppened instead of happened, but I realized that that might not be understood by the part of my readership that are not into bad puns.

As the frog was bathing in the warmth of the birds belly, he swam and he swam and ultimately reached the back end of the bird and managed to stick his head out.

He looked down and realized that he was in  a tough spot at a high altitude looking down at terra firma.

He yelled out “Hey”

Finally, the bird noticed the weakened voice coming from behind.

The bird said, “What do you want?”

The frog replied, “How high are we flying?”

The frog said, “You wouldn’t shit me, would you!”

Sometimes stories like this have a nice ending and this tale is no exception.

It turns out that the frog was to survive this challenge. The bird could not think of a way to get the frog to move backwards so he could be consumed and provide sustenance to the bird. So the bird simply landed back on that pier or wharf and the frog slipped out.

The bird said, “That must have been really hard on you, I guess I’m sorry for screwing up your afternoon.”

The bird surprised the frog and asked, “How are you?”

The frog said, “I feel pooped.”

Tweet
« Etch a Sketch vs Laptop
The words and phrases of my youth. »