Home » Humor » The Sales Meeting and the Trip to Wrigley Field

Way back in the nineties I was the sales manager for the electron device group at Richardson Electronics. At one of our international sales meetings in Chicago we arranged for all attendees to go to a baseball game at Wrigley Field. For many folks from countries like France, Germany, England, Japan, Taiwan, Spain, Italy and a host of others, it was their first Baseball Game and for many, also their last. We organized buses to pick us up at our hotel and take us to the field. The fun began when Larry, I’ll call him Larry because that was his name went to the front of the bus and persuaded the bus driver to pass him the microphone so that he could share his in depth knowledge of baseball and baseball fields. 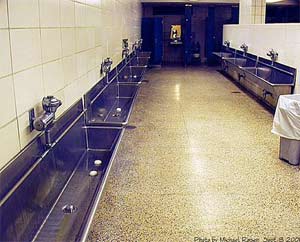 With microphone in hand Larry gave us an overview of what baseball was and how it’s played. He did a fair job of explaining the game and its rules. He then went on to give the guys (most of us were guys, imagine that) an explanation of the unique way in which men entered and used the urinals at Wrigley Field. He explained that the urinals were long stainless steel troughs, perhaps twenty five feet or so in length along the wall. He went on to explain that it was very important to line up, get ready (he recommended pulling down the zipper while in line)  and then take your place at the left hand end of the trough, if it was busy, he warned that the men at the trough would move to the right while tinkling and you had to be finished before you reached the right hand end of the trough. If you were not finished then you had to struggle to freeze the stream and re-enter the line at the left hand end of the the trough. 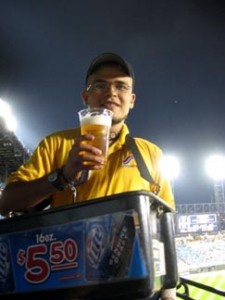 Larry then went on to explain the technique one would use to negotiate for the purchase of beer in the stands. He explained that the beer salespeople would be carrying large trays of beer in cans and that they would be wearing a large button with the beer price marked on it. As it turned out, the buttons displayed in large print that the price was $4.00. Larry told his audience that the price displayed was an ‘asking’ price and that seasoned fans would always negotiate a better price. Larry told everyone that is sales were slow then they could expect to buy beer for $2.00 perhaps less. Remember, many of our visitors were from countries where bargaining is more common than here in the USA. It was pandemonium in the stands when the first beer salesman showed up and our sales manager from France whose English was less than perfect began to negotiate ….

Got a similar tale? Let me hear it!

Here’s something you don’t want to watch