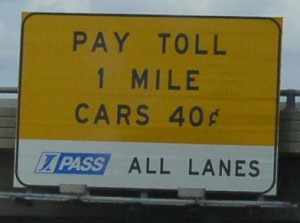 It was a few years ago that the toll on I-90 at Randall Road near St. Charles Illinois was 40 cents. I did not have an iPass, nor an iPhone or iPad at that time.

It always angered me that tolls were collected as the damned toll booths typically slowed traffic so that we, the traveling public had to stop and pay our way incrementally as we drove the interstate highways in and around Chicago.

I was tired and it was late, perhaps 1:00 AM and I had just arrived home from a long business trip. I had been delayed on several flights, arrived at O’Hare several hours late and I was tired, hungry and irritable. I de-parked my car paid a huge toll for the privilege of parking and headed home.

Did I say that I was tired, hungry and irritable. It was about 1:00 AM and I was approaching the toll booth, I extracted from the pile of coins in the ashtray, a Quarter a Nickel and a Dime, which would comprise the needed toll I would have to feed to the toll collecting machine. I entered the toll plaza, still tired, hungry and irritable and threw my three coins into the machine. I waited a few seconds and the bar did not rise to allow me through. I beeped my horn and a human sauntered across from his nice warm building across several empty lanes and reached my car. He then opened the back of the toll machine and told me that I had dropped in on 31 cents, one quarter, one nickel and a penny instead of a dime. I respectfully withdrew a dime from my ashtray and dropped it into the machine. The bar raised and the grumpy toll collector walked away. I did not move and I again beeped my horn and the toll collector dutifully returned, now more grumpy than he was before.

I got my penny back and drove home still irritable, tired and hungry.

Tweet
« Grandmothers and Grandfathers: Is there a difference
Military Words of Wisdom »