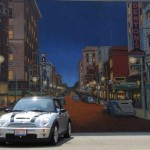 It was 2005 and Cheryl and I had owned our Mini Cooper S since early 2003. For a couple of years we had been towing that poor little car behind our motor home and traveling great distances. Cars behind motor homes suffer as they are bomarded with stone chips, mud and other debris kicked up by the tow vehicle. Our Mini suffered a little more than most, primarily because of the idot driving the motor home. 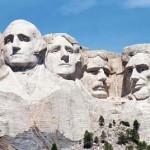 We were on our way to a conference in LA associated with our home business. Let me set the scene, we arrive at a campsite outside Rapid City, South Dakota, near Mount Rushmore late one afternoon. We need to catch up on emails and phone calls as we travel with our business www.amjo.net with us at all times. One can not escape from a home based business when you’re oxymoronically on the road. Our cell phones had no connectivity and neither did our laptop via it’s T-Mobile modem so I un-hitched the Mini Cooper and headed to town to buy a telephone that I could plug in to the camp-site provided phone line. Cheryl remained at the motor home with Mini, Cooper and Bugsy, our three pugs. I return to the campsite, phone in hand, I quickly re-hitch the Mini-Cooper so we could have a quick get-a-way the next morning. All was well, we retrieved our phone messages, hooked up our laptop via phone modem and our day was complete.

The next morning arrived and we departed the campsite on our way to see Mount Rushmore, a few miles down the road. Unfortunately we did not manage to get more than a mile from the campsite before one heard screeching tires behind our motor home. I check the rear view mirror and rearview camera and see smoke rising from the front of the Mini. The engine had seized and many four letter expletive deleted words and phrases were uttered as I stopped the motor home and went to check on the Mini.

The picture is bad. I had left the Mini in reverse gear the night before and things like connecting rods and pistons were hanging around outside of the engine. Not a pretty site! The only good thing was that with some effort I was able to get the Mini in neutral so we could tow it. Were were about to tow a dead Mini around for a while!

We learn that the nearest Mini dealer is in Salt Lake City about 800 miles away. We gather our wits, do a drive-by shooting with a camera of Mount Rushmore and head to Salt Lake City. It was late may or early June and we were pleased that we got to drive through a snow storm in Wyoming. The weather was bad enough that we stopped at a KOA outside Rawlings Wyoming.

I called Farmer’s Insurance to tell them of our plight and they were kind enough to tell us that no insurance coverage would be available. We did not know then that the engine and super-charger were going to cost about $10,000.00 to be replaced.

Well we arrived without further incident at Salt Lake, dropped off the Mini for a repair estimate and headed for a KOA in Salt Lake City. The next day we dropped into Murray BMW and learned that the repair was going to be $9500.00 plus or minus a few pennies. This prompted another call to Farmer’s Insurance to learn that we still were not going to get a dime from the insurance company.

We began our trip to Los Angeles, remember the part about us going to LA for a conference. I don’t recall where we stopped between Salt Lake and LA but there was a TV station nearby and we truned on the TV to take our minds off the poor little broken Mini and our emptying bank account. As we’re watching TV, a Farmer’s Insurance commercial comes on screen. The commercial showed a man getting out of his red shiny convertible at the edge of a cliff. He gets out of his car to chat with someone who has walked over to admire his bright red dream car and he leans on the trunk. He had not set the emergency brake or left it in gear and his action caused the car to start rolling and exit the picture as it plunges over the cliff, the voice-over said “You’re covered”.

This prompted another call to Farmer’s Insurance and I recounted the tale of the commercial that I’d seen on TV the night before and stating clearly to them that what I had done by leaving my car in gear was not as dumb as the fool in their commercial who had not left his car in gear and pushed it over the cliff! A couple of supervisors later, agreement was reached that they would cover the enging replacement. We never have seen that commercial again!

The rest of the trip was not without incident but that’s enough writing for now!

Do you have a store to tell?