Home » My Life » Training a Saint, Saints don’t like change! 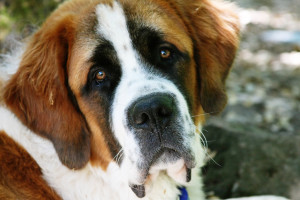 Taffy, our 215 lb. Saint Bernard, was becoming a challenge. Back in Goose Bay, he ran free, and trying to walk him with a leash and confine him to a small backyard were things the dog was just not used to. It was time for Taffy and me to go to obedience school. A trainer by the name of Diane Nelius, a breeder of Shelties, was recommended to us. Off we went for our interview. Diane fell in love with Taffy, our great big loveable, uncontrollable and ungainly monstrosity of a pooch. We were in!

The first lesson was to be in a class environment at her country home the next week. We were told to buy a choke collar and a six-foot lead. We were also instructed not to put the choke collar on the dog. We were to learn how to do this at our first class.

The day arrived. It was raining! We called Diane, and we were told “Come rain or shine.” Class was to start at 7:00 pm. Off we went in our Toyota Corolla 1200 CC Station Wagon. Arriving at Diane’s we could see that she had erected a large marquee, and I could see that perhaps fifteen to twenty people and their dogs were under the marquee out of the rain. I parked the car about fifty yards from the tent, popped open the hatch back of the wagon, grabbed Taffy’s leash, and he jumped from the car. The tent, the dog and the leash were on my left, the rear of the car was to my right, and I was reaching up to close the hatch back. 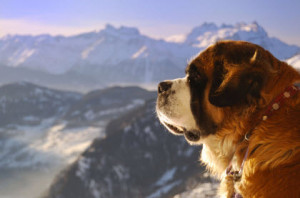 It was at this instant Taffy noticed the fifteen or twenty other dogs under the marquee. Had the leash been tight I might not have been caught so badly off balance. With a huge WOOF as only a Saint Bernard can produce, Taffy bolted in the direction of the tent. Immediately I was pulled off my feet and became parallel to the ground. I was lying on my chest in the cool wet grass. It was still raining quite hard. I managed to get my right hand around to where my left hand was holding the leash, and Taffy continued to pull.

I like to think that the drag of me being pulled along in the grass did slow him down a bit. All I could see was the bouncing brown and white butt of a Saint Bernard with its tail in the air wagging wildly. Occasionally I got a glimpse of dogs and people scattering in all directions as we closed in on the tent. Cheryl, my wife was absolutely no help at all. I learned later that she was standing by the car doubled over in merciless laughter.

Diane Nelius arose from the desk she had placed in the tent for registration. Reaching her full height of 5’2” she stood between the scattering canines and their masters. Taffy came to a stop in front of Diane; I was lying on the ground absolutely soaked with grass stains on all of my clothing. Diane simply said “It looks like we have work to do!” You should try it!

Tweet
« Are you a Pilot or a Lesbian?
The Ultimate Rule Maker »