Home » Humor » Trying to do the docent thing! 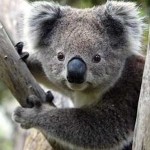 It was about a month ago that I was at the Columbus Zoo with the the family. It was a warmish day and I decided after seeing several regions of the world and their animals that I’d take a rest in Australia.

I opted to sit on a bench in the shade at the Koala cage, while the family wandered off to somewhere else in Australia. There were a couple of extra animals in there that I assumed were Porcupines until I read the sign. The little guys wandering around were Echidnas, not Porcupines.

It turns out that the Echidna is an egg laying mammal, you can read about it at Wikipedia <Click Here>. OK Let’s get back to me doing the docent thing for a change.

The Echidna was created about 54 seconds after God created Marijuana 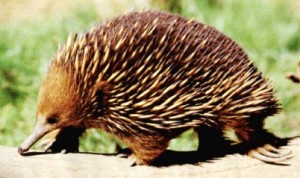 My bench was perhaps 15 feet from the cage where the Koalas and Echidnas ranged and folks kept getting between me and the animals, blocking my view. One pair included a young mom and her 6-7 year old son. The son was looking in the cage, the mom was looking up at the Koala in a tree and the young man was tugging on her shirt, saying “Mom, Mom, Mom, take a look at the Porcupine.” The mom looked down and saw the “Porcupine”, she said, “We have those in the USA, take a look at the Koala up there.”

I decided to point out that the little animal was not a Porcupine and that it was an Echidna, something I had learned at least 3 minutes ago when I read the sign on the cage. With sort of a ‘thanks for making me look dumb look on her face’ she thanked me, explained it to her son.

She then asked me “Are you a docent?”

I replyed “I could be.”  (I was not wearing the bright red T shirts that the real docents were wearing, nor did my shirt say “Columbus Zoo Docent” in big white letters.

I don’t know why, but I was feeling a little mischevious and I was angered a bit by the woman’s attitude. I went on to tell her that the Koalas in this exhibit are not Australian Koalas but they were from Canada. I pointed out like any docent individual would that Australian Koalas cannot survive north of the equator. She was a little incredulous but I think she believed me. She wandered off. I do wonder if she shared that pearl of wisdom with perhaps her husband or a friend later in the day.

Well at least I did what any docent person would!