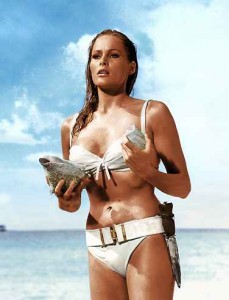 The way I imagined Ursula

It was in Winnipeg many years ago. I was a bright young salesman for Varian Canada. It was probably 1975 or so before I was promoted to sales manager. A sales manager would never make this mistake.

As I recall I arrived in Winnipeg late one evening and had plans to visit several customers the next day. I arose the next morning, had breakfast and then headed to my car in the parking lot. Someone had placed a business card under the wiper of my rental car. I guess the card was twentieth century spam. Try as I might, the card would not dislodge when I operated the wipers so I got out of the car and saw the card was from Ursula’s Body Rub Parlor. You’ll understand as you read on why I remember the name of the Body Rub Parlor. It’s something I cannot forget  I don’t recall if I was happy to see the card or simply did not want to litter but the card was placed in my jacket pocket and I headed out to the meetings planned that day.

After making a few sales calls, I had an appointment with a manager at MTS (Manitoba Telephone System) , “The Phone Company”. Let’s just say his name was Jim which it was.

Jim and I met at his desk and we exchanged handshakes and business cards. We sat opposite each other and began to chat. Jim had placed my business card in front of him as we began our chat. I glanced down to see that the card on the desk was not familiar to me. It did not have our company’s logo. Slowly, my brain wrapped around to Ursula and the card she had left on under the wiper.

This was an important meeting with for me a new customer and I was uncertain as to Jim’s morals or sense of humor. He must have seen me staring at the card and he glanced down to see Ursula’s card. The look on his face showed confusion or perhaps disbelief. I quickly explained my mistake and some laughter ensued, he received my card but did not return Ursula’s.

Jim and I met several times after that and always laughed about the experience and I learned a couple of things. One is never mix my own business cards with Ursula’s or anyone else’s for that matter and the second is that sometimes a memorable mistake can create successful sales contacts.

I still wonder if Jim ever called Ursula?

Tweet
« When I am an old woman I shall wear purple.
Having a bad day? Think of poor Santa Claus »