Home » My Life » Wells, Wells, John Wells is my name and selling is my game.

It's still 1972 and this is the tale of John Wells or the return to Labrador. Cheryl and I had completed a wonderful tour of parts of New Brunswick, Nova Scotia and the Island of Newfoundland. In a couple of weeks we had driven and ferried several thousand miles. 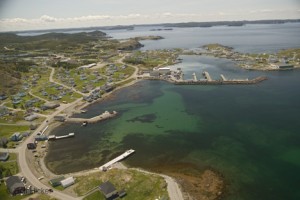 We arrived at Twillingate Newfoundland to board the coastal boat back to Goose Bay. We knew the trip back was to be a lot longer as the boat would be anchoring off the coast near several coastal seaports to deliver supplies. We also expected it to depart on time. That was not to happen. We arrived at the port at the prescribed hour which to my recollection was late afternoon. There was very little activity and there certainly was no coastal boat. It took some time to ﬁnd someone who would tell us that the departure was delayed. I can recall asking as to how long the delay might be and typical of the carefree Newfoundlanders we learned that “It could be some time boy!”

Cheryl and I decided to wait on the pier. We had our camper, some food, a way to make a cup of hot tea and/or cook a small meal. We also had two dogs, remember them, Newf the mongrel and Taffy the Saint Bernard. We had also bought a small word game called Boggle. Cheryl and I read for awhile, made a meal and started to play Boggle as we waited. And waited, and waited. We never really played Boggle much after that marathon session. By the wee hours of the morning we dropped off to sleep and awoke the next morning in the midst of a lot of dock activity. Off to our starboard was our boat. 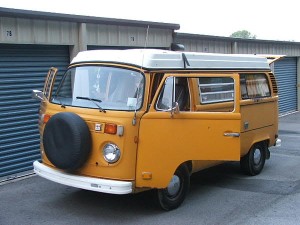 Arrangements were made and a time was set for our camper to be “slung” on to the deck and tied down to the appropriate hatch cover. We were to return at about 9:00 AM for the loading. This time we had not drugged our Saint Bernard, and although somewhat concerned about getting him on board, I felt we could do it.

All went well and in a sort of anti-climactic way the camper was hoisted in the air and placed on the deck. Cheryl and I proceeded up the gangplank with our two dogs. We were on our way.

The dock was clear. At about the moment that the gangplank was to be lifted, a car showed up alongside on the dock with a man in his ﬁfties or early sixties getting out and ﬂailing his arms. He was late and the crew was not amused.

He began to remove boxes from the trunk of his car and from the back seat of his car and from the passenger’s seat of his car, and placed them on the pier waiting for help to put them on board. This was not a cruise ship, and passengers were treated more like freight or cattle and were expected to load their own luggage. We had been fortunate in that our luggage was hoisted on board with the camper. The gentleman on the jetty obviously expected cruise ship support and made a lifelong friend of the ship’s First Mate by yelling, “Hey you, come get my luggage!” It was becoming ugly. The First Mate did order a couple of seaman to help with the boxes, and begrudgingly, because this was clearly not their job, they carried the boxes onto the ship. I seem to remember a couple of healthy lads who were passengers helped him move the boxes to his cabin one or two decks down.

Many of us were chatting trying to guess what might be in those boxes. Without much further adieu, we were on our way steaming out of the Port of Twillingate, and it was a beautiful day. Cheryl and I had been assigned ﬁrst sitting in the ships small dining room. There were two or three sittings for breakfast, lunch and dinner so that all could be seated for meals. We seated ourselves at our assigned table and found ourselves sitting with a woman in her early twenties, an employee of the province going to one of the outports to study something, I do forget what. There was one empty seat at our table for four.

You guessed it. The lifelong friend of the ﬁrst mate was to join us. The introduction was one of the most memorable in my life. I said “Hi, I’m Chris, this is my wife, Cheryl” and he replied in a bold voice, “Hello, my name is Wells, Wells, John Wells, Wells is my name and selling’s my game!” As long as I live I will never ever forget Wells, Wells, John Wells and perhaps from now you won’t either.

The lunch conversation was not memorable until I happened to blurt something like “when you introduced yourself, you said that your game was selling, What is it that you sell?” I was not prepared for the response which was simply, “Oh I sell ﬁre extinguishers and religious pictures.” know you can imagine the thoughts racing through my brain to counter such a statement. I think I simply said “Oh” or something just as clever. I am seldom without something to say, but at this moment I was. The rest of the conversation was cordial other than the fact that he would look me in the eye and then with a nervous twitch his gaze would ﬂick to something over my right shoulder. I found myself constantly checking behind me when I was talking to him trying to see what his nervous eye never did. Lunch ended and the rumors started to move around the boat. We were asked by several strangers if in fact he had uttered those words, “yes I sell ﬁre extinguishers and religious pictures!”

As the afternoon progressed we spent our time out on the hatch cover with the dogs enjoying the beautiful weather and the breeze. The hatch that our camper was lashed to was in the lea of the bridge and quite warm. Many people would come and join us and chat as the dogs, particularly Taffy, our Saint Bernard, were quite the attention getters and we made friends easily.

Dinner with Wells, Wells, John Wells was uneventful and as evening drew nigh, we began to hear music coming from the lounge. The lounge was an informal room near the dining room with a few card tables and soft chairs and a piano. Wells, Wells, John Wells was at the keyboard and people were gathering around him singing boisterous hymns and songs and the evening was starting out as fun. He had gathered a “crowd” of perhaps 1015 people around the piano.

Without warning, Wells, Wells, John Wells stopped playing and with some ﬂourish closed the cover over the keyboard of the piano. He was a tall man and stood up, reached behind the small console piano and brought up a portfolio case about thirty inches square and 2-3 inches thick. With ﬂare and a much practiced motion, the case opened like an easel. There on display in front of us was a display of religious pictures. I was sore afraid!

The part that surprised me is that people actually began opening their wallets and buying pictures. Others asked him to stay open for a few minutes so they could go to their cabins or perhaps ﬁnd their spouses so they could get some money to buy the pictures. I would guess that he took in about $300.00, closed the case, lifted the cover on the piano, started playing again and roughly thirty minutes later, closed the piano and started selling all over again. I was still a technician in those days, wanting to be a salesman, and it seemed to me that this was the kind of salesman I did not want to be.

Mr. Wells, John Wells was “well” prepared. He reached into his Harris Tweed jacket with the tattered leather elbows and his hand returned to the daylight with a well worn wallet, perhaps one and one half inches thick, maybe more. The wallet opened and one of those accordion type folding wallet sized card holder things was pulled from the wallet. The long plastic beast was probably three feet long and in each pocket and on each side was a salesman’s license of some kind. He had licenses for just about every state in the union and every province of Canada. There were even some city licenses. He enjoyed dragging these out, carefully reading each one out loud and ﬁnally came to the one for Newfoundland and Labrador. He carefully removed it from the sleeve and allowed the young lady to see that it was valid and properly dated. I learned the need for preparedness that day. This gentleman was well organized. He knew his product and his customers.

Now we all knew how serious Mr. Wells, Wells, John Wells was about his business. To this day I have never met a man like him and probably never will. As the trip progressed I did ﬁnd a softer spot in my heart for him as I learned he had no family or roots and that he had been an itinerant salesman for over twenty years. He had a brother or a sister somewhere with a family that he would visit once in a while. Each time I think of Mr. Wells, Wells, John Wells I think of loneliness. From time to time on my business travels during my career, there have been pensive moments when my family has been half way around the world, and I’m sitting in a hotel room somewhere or perhaps sitting alone at dinner. At those times I would think of Mr. Wells, Wells, John Wells is my name and selling’s my game.

Mr. Wells, Wells, John Wells, on the second day as his infamy was traveling around the boat, sat on a bench with an open box of ﬁre extinguishers. These were the small hand held aerosol kind that one might buy to put beside the stove. I can’t remember the prices or the number he sold. do know that he upset the captain when Mr. Wells, Wells, John Wells was recommending people buy one for their cabin just in case…